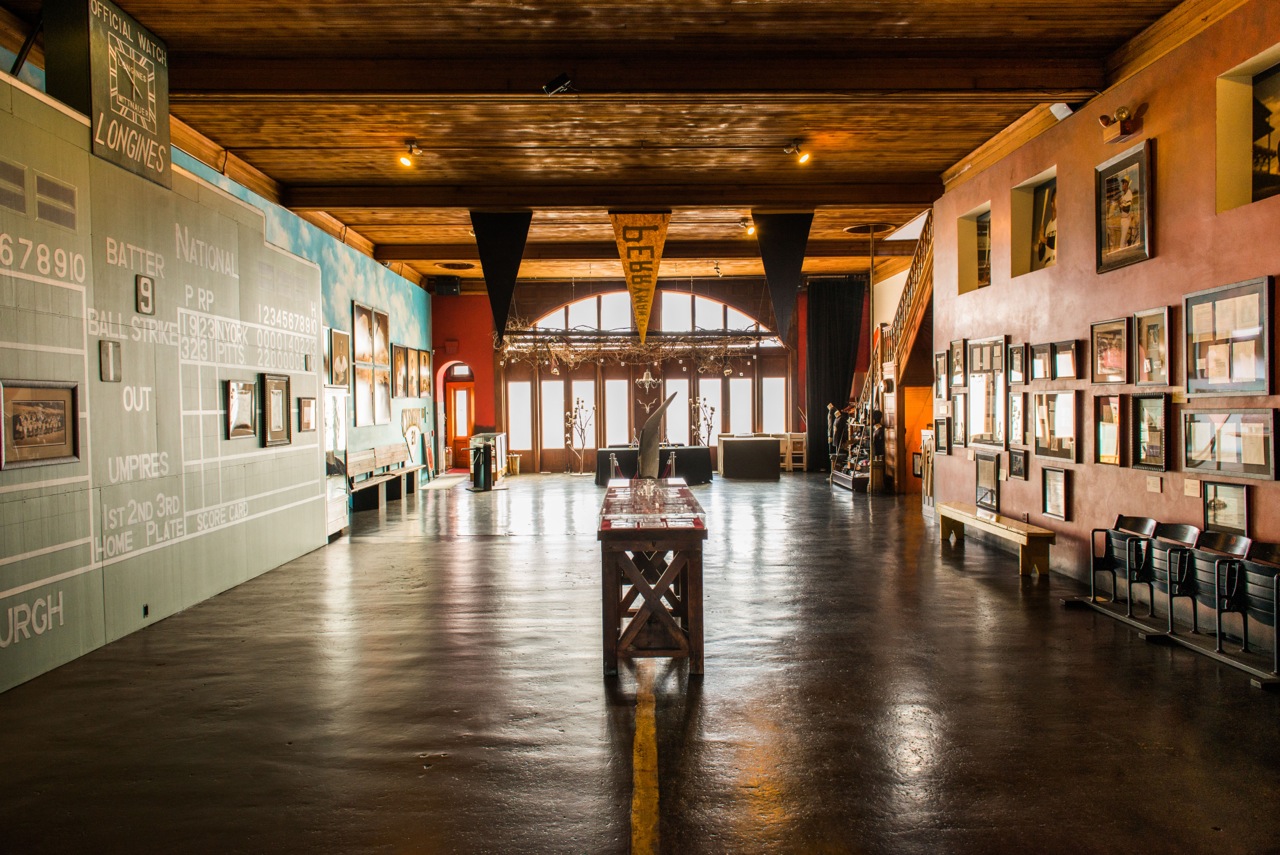 Here’s a newsflash — I’m a big baseball fan. So it may come as a surprise, as it did to me when I learned about the Clemente Museum, that I didn’t know it existed until 2011. I suspect that many Pittsburghers may not know about it, so here we are with an Off The Beaten Path article.

The Clemente Museum honors, arguably, the greatest Pirate of all-time in the form of Roberto Clemente. Clemente died too soon in a heroic fashion that immediately solidified his status as a Pittsburgh icon. The overloaded airplane he was riding on, stuffed with food and medical supplies for victims of an earthquake in Nicaragua, went down on December 31, 1972.

Local photographer, Duane Rieder, took it upon himself in 2006 to honor that legacy by opening the museum in a restored fire station, known as Engine House No. 25. The only thing more fitting would be if it was Engine House No. 21. “The walls are 21 inches thick in the building. There’s a steel beam upstairs from Carnegie Steel, stamped 1896, that’s 21 inches deep. It’s holding up a rubber roof, there’s no need for it to be that thick!” exclaims the owner.

Exterior of the Clemente, during non-tundra conditions
Photo by Duane Rieder/Clemente Museum

When you talk with the affable Duane Rieder, you get the sense that good things just naturally happen to him. Of course, that sells short the incredible amount of personal hard work he’s expended to put himself in the position to have those good things come his way.

Case in point is the building housing The Clemente Museum. When Rieder bought it in 1996, Lawrenceville was nowhere close to being the trendy Ground Zero for hipsters that it is today. “My in-laws thought I was insane,” confessed Rieder during my recent visit. Lawrenceville, to be polite, was socio-economically challenged during that time period. Rieder bought the space to be his personal photography studio. It wasn’t until 2006 that The Clemente Museum opened in advance from a visit from Roberto Clemente’s widow, Vera.

“We hurried and slapped some paint on the interior and dressed it up in one month,” said Rieder. “Vera Clemente was coming into town for the All-Star Game and we wanted to show her the space and the collection.” After that visit, a long-lasting bond was formed between the Museum and the Clemente family, even though Rieder had known them since 1994. There are currently five pieces on loan from the Clemente family and each are key pieces, including two of Clemente’s Gold Gloves, his Silver Slugger award bat from 1961 (valued at $150,000), and the Hall of Fame plaque when Cooperstown changed his name and gave the first one to the family to keep, as it reads Roberto Clemente (Walker).

Everything else in the Museum is either from Rieder’s personal collection amassed over the years through purchase, trade, or his childhood or from people who chose to donate their own Clemente artifacts through their wills.

Rieder, a youngish looking man of 54 trips around the sun, adjusts his ’21’ cap that is the logo of the Museum and gestures to a newly installed case housing baseball cards from Bill Mazeroski and Steve Blass’s career. “This guy named John DeMaria asked if he could come by and have us check out his cards. He shows up with this leather case and it’s pretty evident that he’s never going to let these things out of his sight by the way he’s clutching the case. He proceeds to show us this outstanding collection of high grade cards, I’m talking 8’s, 9’s, and 10’s, stuff we don’t have here. At the end of the meeting, he says ‘OK. I’d like to give these to you.’ Just like that.”

A world class collection of Clemente baseball cards was also willed to the Museum and are prominently featured on the main floor under high-test museum-quality glass. “They relegated my puny collection of cards over to the wall here,” joked Rieder. He points out his favorite card as the 1969 Topps Clemente. “There’s just something about his stance, the way he’s holding the bat,” he says as he shows me the 1973 Topps card. “They already had this one printed and ready to go when he died on New Year’s Eve in ’72. They felt it was the best way to honor him.”

Rieder was a self-professed baseball junkie growing up. “We were poor and there were five of us, so we would play baseball all day long in the summer, rain or shine.” He was 11 when Clemente died in the plane crash. “I thought, he’s a professional athlete in great shape, surely he’ll just swim to shore.” It was the first experience for him in dealing with a celebrity/hero’s death.

He excuses himself to take a call on his cell. I quietly drift around the main floor looking at all the pieces framed on the walls. Personal letters to and from the family. Plane tickets from Eastern Airlines. A side contract in 1966 to give Clemente $500/month to scout for the Pirates in the Caribbean during the off-season. A humorous exchange of letters between Roberto and then-GM Branch Rickey, Jr. where Rickey offers him $7,000 for the 1956 season and Clemente counters in a return letter that he wants $10,000. Let that one percolate for a minute.

When Rieder returns from the call we drift over to an easel with two invitations written in old-timey calligraphy and embossed with what looks like the City of Pittsburgh crest. Hard work and happenstance came to a confluence again. “My brother and I were cleaning out the old Weldin’s Bookstore downtown. The lady had no money to pay us, so she said whatever we found we could keep,” said Rieder. “My brother’s a real pack rat so he kept everything and sorted through it later on. I’m talking like three storage containers full of stuff. After a while, he finds these,” and pointed to the invitations for me to inspect closer. They’re from 1909 announcing the opening of Forbes Field and then from 1910 announcing the Championship Banner raising at Forbes. City of Pittsburgh history that was salvaged before it was destined for the dump.

At the end of the visit, we’re upstairs in his photography studio. On the way there, Rieder pulls two bats off a wall rack for me to hold. The first is a bat given to him by Yasiel Puig last year, emblazoned on the end with his #66. It’s well-used; there were definitely some homers and bat flip stories that bat could tell. I’m also holding a remarkably light bat from Giancarlo Stanton. With his prodigious power, one would think he swings an actual redwood tree, but this is just a sliver of a tree stained a light red.

The studio itself has a 150″ screen that comes down from the ceiling with a ceiling mounted projector. The plan is for the Museum to host one of the early screenings, around Opening Day, of a Thomas Tull-commissioned documentary on baseball collectors around the country. Rieder was included from the start due to his friendship with Tull (part-owner of Steelers, massive baseball collection himself), but quickly grew to be a featured part of the movie when the producers suspected that he unknowingly had a Honus Wagner bat in his possession.

“So, yeah, another weird story about how I got this. My brother and I were renovating a building in Oakland about 30 years ago. This bat was just laying in a corner. I thought it was a Fred Clarke bat, which was good enough for me.” When the Museum opened, he put it in the corner of his assistant’s office along with some other bats in his collection. “The producers saw it and immediately brought in John Taube.”

Who’s John Taube you ask? From Rieder’s description of him in hushed reverence, he’s like The Wolf from Pulp Fiction, but in the world of authenticating baseball bats. “He’s the #1 guy and…there’s not even a #2,” he said. “He comes in from New Jersey in this Escalade outfitted with enough bat racks to hold a hundred bats. He opens his computer, hits a button, I don’t know…maybe ‘H’ for Honus, and pulls up these pictures of him swinging a bat that’s taped just like this one.”

He takes the bat out of the protective case it’s now stored in. He offers to let me hold it. “It could be worth $250,000. Maybe more.” I pull my hand back before it touches my hand and I have a chance to screw it up. The head of the bat is squared off, not rounded. The inscription is from ‘Hillerich & Son Co.’, which puts it in the manufactured time of 1910-1916, right in Honus’s wheelhouse. “Taube’s still looking for one slam-dunk picture from a set we ordered from a place in Chicago to be 100% certain.”

A side venture of Rieder’s is winemaking, with the product known as Engine House No. 25 Wine. Many local celebrities, such as Mario Lemieux and Franco Harris, have their own personal casks in the basement of the building. When he first started making wine, Rieder bottled each one by hand and personally sealed the bottle with red wax.

Basement of the Engine House No. 25 wine room

“I stole all my daughter’s red Crayons, she had a ton from when I did a shoot for Crayola, but she kept wondering where they all went! I melted the wax with an acetylene torch and burned my fingers I don’t know how many times at the start.”

The demand has grown to such a level that he’s preparing to open a wine bar next door called Arriba, again to honor Clemente’s nickname, that will be open from Thursdays through Saturdays. There will also be an expanded Clubhouse store in the new space to sell merchandise, like the ’21’ shirt favored by Pearl Jam’s Eddie Vedder of late.

But for Rieder, his photography business will always be his number one priority. “Without photography, none of this would be possible. It has afforded me the opportunity to do all this, so when a client calls, that takes precedence.”

The Clemente Museum is available for tours by appointment only. The space can also be used for fundraisers, private social events, and small weddings of around 80 guests. If you’re a baseball fan at all, especially if you grew up cheering for Roberto Clemente, call ahead and make the trek down to Lawrenceville.

Kevin Creagh is the author of the sci-fi novel Creating Christ, available now on Amazon