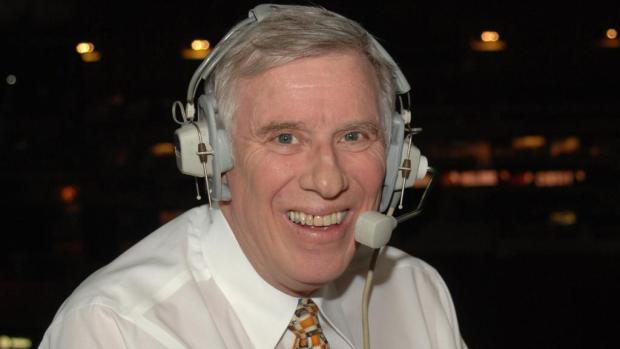 The Pens have moved up and down the radio dial in their history, both AM and FM. Mike Lange has been on a lot of frequencies.
Photo via NHL.com

On December 31st an important piece of Pittsburgh broadcasting history went dark when 1410 AM KQV went off the air. The station has the distinction of being one of the oldest stations in the United States and was on the air for an amazing 99 years. While KQV was mostly an afterthought to anyone under the age of 60, the station was the musical soundtrack to the lives of anyone who grew up in Pittsburgh in the late 50’s through the 70’s as a top-40 music station. Forgotten by many, KQV also broadcasted Pittsburgh Penguins games during the 1975-76 season and then again from the 1981-82 season through the 1983-84 season.

In fact, looking back on the history of the Penguins ? radio broadcast, their flagship station switched about as many times as the Penguins ? lines during the current season. In the early days of the franchise, AM radio was where Penguins fans had to go to hear their favorite team. The team called the former WTAE 1250 AM home for the first two seasons of its existence with Ed Conway doing play-by-play in the team ?s inaugural season, followed by Beckley Smith performing the duties for the 1968-69 season. The Penguins returned to those airwaves over two decades later for the 1993-94 season, with Doug McCleod providing the play-by-play. Unbeknownst to most Pittsburghers, 1250 AM is still on the air today as WPGP, a talk station with mostly syndicated programming.

In the Penguins ? third season, the team found what would be a very temporary home at 1080 WEEP (now WWNL). The team also switched play-by-play announcers again, with Bill Hamilton now on the call. It was in the team ?s fourth season, 1970-71, that the team finally found a stable home and a consistent play-by-play announcer. It was that season the team moved to the powerful 50,000 watt 1020 AM KDKA as its flagship station and also hired Jim Forney, who would do play-by-play for the next three seasons. The Penguins stayed with KDKA for eight of the next nine seasons. However, for the 1973-74 season, Forney was out and the Penguins brought in Joe Starkey; no, not the Joe Starkey heard on 93.7 FM today, rather the Joe Starkey that called the famous 1982 Cal versus Stanford, “The band is out on the field!” game. He only lasted one season as the voice of the Penguins, but the very next season Mike Lange arrived in town and the rest, as they say, is history.

The Penguins were ahead of their time in broadcasting their games on an FM station when they joined forces with WWSW (3WS) for the 1979-80 season. That experiment lasted only two seasons, but much like KDKA and WTAE, the Penguins would have a second stint with 3WS many years later. As mentioned above, WTAE ?s run ended, along with the first part of Mario Lemieux ?s first career, in the Spring of 1997. The following season the Penguins would return to FM for good, but not with 3WS, rather its sister station, the famous 102.5 WDVE. That relationship lasted just two seasons before the Penguins reunited with 3WS for 1999-00 season through the 2005-06 season. To begin the 2006-07 season the Penguins moved down the hall again to WDVE ?s brother station 105.9 FM WXDX. The move also signaled the return of Mike Lange to Penguins ? radio broadcasts. It had been 12 years since Lange had done radio play-by-play. During that time, Doug McLeod, Matt McConnell, and Paul Steigerwald, respectively, took over the radio play-by-play duties while Lange took control of the television play-by-play. With the move to WXDX, Lange and Steigerwald ended up flip-flopping their roles as the television and radio announcers.

The Penguins seem to have found a permanent flagship home at WXDX. Their radio network is the largest in the NHL with 40 stations, covering five states. It would have been hard to imagine that the Penguins network would have swelled to the size that it is today when it was humbly broadcasting on KQV in those pre-Mario days. KQV has signed off and AM radio is on a steady decline, but it ?s important to remember the key role that KQV and some of its other AM brethren in Pittsburgh played in the Penguins ? early broadcast history.