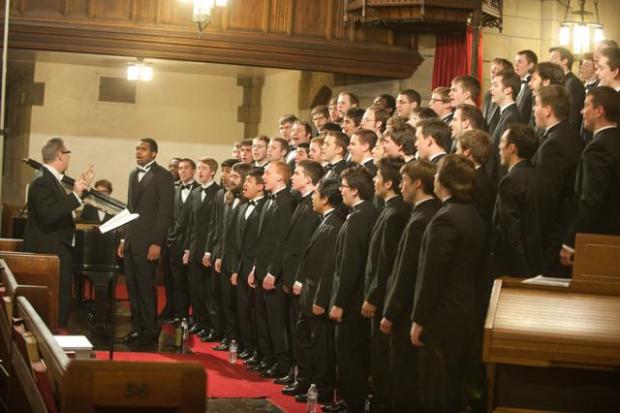 The year was 1890 and the campus of the University of Pittsburgh, then known as the Western University of Pennsylvania, was abuzz. Pitt football aficionados will know that just the previous fall the football team had first begun to play on the WUP campus, located in what was then known as Allegheny City and is today the city of Pittsburgh’s North Shore. As the new sounds of leather-helmeted heads bashing into each other resounded around the campus, another new sound was also being heard. The University of Pittsburgh Men’s Glee Club, formed as just a mere octet in 1890, joined the busy cacophony of that era and that amazing time of industrial growth for Pittsburgh.

Both the University of Pittsburgh’s football team and the Men’s Glee Club have had their highs and lows over the last 125 years, but the legacies of both groups have vital places in the history of the University. Mr. Richard Teaster, the musical director of the Pitt Men’s Glee Club for the past 17 years, understands the weight of this history, but it is his focus on musical excellence that has made the PMGC the pre-eminent vocal group on Pitt’s campus and one that has become renowned both nationally and internationally.

The popularity of shows such as Glee and movies like Pitch Perfect have increased the interest in vocal performance at the college level, but Mr. Teaster has made the key decisions that have overseen an unprecedented renaissance in both membership and musical caliber, placing the Pitt Men’s Glee Club among the top men’s collegiate choral ensembles in the nation. “If you make them audition, they will come” is a bit of change from the famous Field of Dreams quote, but Richard understands that high expectations will produce high results when evaluating potential singers. The PMGC now has over 65 undergraduate student members and has transformed them into a vocal group known throughout the campus for performing formally in full tuxedos.

“I was made aware of the group in 1999 and after being told that they were in need of a director, I conducted research into the 100 plus years of history. The 1970s particularly intrigued me.” It is not surprising that some of the PMCG’s glory years might also coincide with the successes of the football team. If Dan Marino was available for comment, he would very likely smile and have a fun anecdote regarding his interactions with the Glee Club during that time. Moving forward several decades, Pitt football closed out their time at Pitt Stadium in Oakland by beating Notre Dame 37-27 in 1999 and it was the Men’s Glee Club that sang the National Anthem and Alma Mater on that sunny afternoon. In today’s era, Richard Teaster has successfully reenergized the PMGC’s link to the University variety through a campus-wide and community functions, including graduations, receptions, alumni gatherings, sporting events, and Chancellor’s events.

“If you charge for it, they will come” is also a bold move on Mr. Teaster’s part, but the continuously sold-out performances of the Men’s Glee Club has shown that he is the right person at the right time in the right place.  “The unusual psychology of this is that people think that if something is free, it is not worthwhile,” he said. He was demure about the funding challenges placed upon the group by the University, but it seems as if these financial issues of running a group are also part of the PMGC legacy. It was a challenge for him just to convince the University to allow the PMGC to charge for attendance, but “finally the music department realized how many people were coming to the Glee Club concerts and admitted ‘Boy, you guys are really good. You should charge for this.’”

Holding degrees in vocal performance from the University of North Carolina School of the Arts and Rice University’s Shepherd School of Music and having further professional studies at Cincinnati College-Conservatory of Music and the Pittsburgh Opera Center, Richard was recently appointed to the voice faculty of the Carnegie Mellon School of Drama’s Musical Theater Program. He is also a Lecturer in the Department of Music at Pitt where he teaches private voice lessons and the popular Class Voice: Introduction to Singing course. His previous appointments include Assistant Director of Choral Activities at Duquesne University’s Mary Pappert School of Music and the Assistant Director/Accompanist position with the Cincinnati Men’s Chorus.

In addition to conducting the Glee Club at Pitt, Mr. Teaster is an active bass-baritone soloist in the greater Pittsburgh area and beyond, and has been featured with such local ensembles as the Pittsburgh Opera, Opera Theater of Pittsburgh, Chatham Baroque and the Pittsburgh Symphony. He has also sung with such noted companies as the Aspen Opera Theater, Cincinnati Opera, Des Moines Metro Opera, Shreveport Opera and the Detroit Oratorio Society. This fall, Mr. Teaster founded the Steel City Men’s Chorale, a community-based men’s ensemble devoted to promoting quality choral music for men’s voices throughout the greater Pittsburgh region. His qualifications doesn’t mean that Richard isn’t open to having some fun and the PMGC gained some notoriety on YouTube for their Harlem Shuffle video.

Richard feels the pressure that accompanies being the director of a group with 125 years of history. “Attendees at our events and supporters of the group expect a high level of quality. We strive to provide that each and every time.” The University of Pittsburgh Alumni Association recently hosted a 125th reunion weekend in March, with a highly successful concert that was simultaneously broadcast on WQED. The University of Club also tours annually, both internationally and domestically and recently gave a series of concerts in the Czech Republic, Croatia, Italy, Hungary, and Austria. More information, including how to donate to support this amazing group, can be found at their homepage.

David Barkovich interviews newsmakers from the Pittsburgh area in unusual locations using non-standard interview formats. David is a lifelong Pittsburger, a proud father and husband, and is extremely sore from training for the 2015 Pittsburgh Marathon.