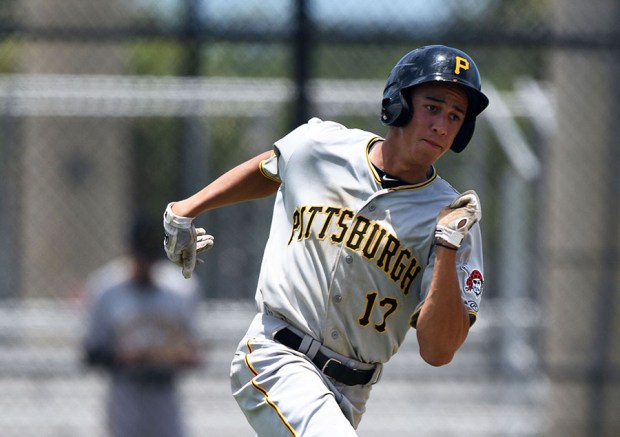 Will 2014 1st round pick Cole Tucker realize the potential that got him drafted?
Photo by Mike Janes/Four Seam Images

Time for the third installment of our new fangled prospect series. First, we looked at the fringe prospects who have both a low floor and a low ceiling. Then we had a look at the likely contributors with limited upside whose rookie cards I’d have had no interest in as a child. This week we’ll look at the “high ceiling, low floor.”

Every prospect has a range of potential outcomes for their career, some being wider than others. We decided to break the break the system down into tiers this year grouping players based on their ceiling and floor. For the sake of this conversation a player with a ‘high ceiling’ would be an average or better position player or a #3 or better in a rotation. A ‘low ceiling’ would be like a bench or non-closer type bullpen role. Meanwhile a player with a ‘high floor’ is someone who we felt pretty good will stick in some capacity on a major league team for multiple seasons. A ‘low floor’ would include your AAAA, cup of coffee or career minor leaguers.

High ceiling, low floors guys often spark the most debate in any prospect conversation. We’ll see some of that controversy below. Some folks will focus on the floor, and ignore the ceiling often due to distance from the majors.  Others will focus on  the ceiling ignoring how few players in this group get there. Almost every person I’ve ever talked prospects with has a guy or two in this category they love. For me personally, this is any player with pedigree in the low minors, or an advanced player who still seems quite raw. They are the proverbial high risk, high reward types and really the range of outcomes for these players are unlimited.  Truly this is a group to dream on.

Alex Stumpf (AS) – He was a unanimous All-American before being drafted in the first round last year. Has raw power, a knack for getting on base and a cannon for an arm. His glove needs a lot of work though, and that power has not translated to game situations yet. May project better as a first baseman.

Kurt Hackimer (KH) – Craig was one of the best power-hitting prospects from last year’s draft class, which is good because he’ll need every bit of that power to make it to the major leagues. Craig is big, slow, and destined to move from third to first. He will have to hit at a clip much higher than the .280/.412/.362 he posted in 63 games at Low-A West Virginia last season to make an impact as a first baseman.

Michael Bradley (MB) – He could be a slower Jason Bay with a cannon.

Steven DiMiceli (SD) – Imagine if the Pirates had a chance to do everything over again with Pedro Alvarez and take the time to develop his hit tool in the minors instead of spring training. That’s Will Craig. He still needs work with the wood bat, but I think he has the potential to be a well-above average major league hitter.

KH – Escobar is a skinny Colombian pitcher who really whips his fastball. The problem is he rarely knows where his pitches are going. Still, there is plenty of potential for growth.

MB – Supposedly has 3 decent pitches and velocity is improving.

SD – A player who has slowly grown on me. He was essentially a college freshman in a league meant for juniors and excelled.

AS – Like many of the Pirates’ young righties, the fastball gets him on this list. His curve has spin, but he has to be able to throw it for strikes.

AS – Garcia’s fastball has gotten him this far, but concerns with his command, frame and offspeed stuff makes him a concern. That heater could still get him in the majors though.

Kevin Creagh (KC) – Age is starting to creep up on him as a true prospect. He could be a valuable #3, but it appears as if his path is more to the bullpen with a plus fastball.

KH – I have a hard time labeling a 24-year old who hasn’t pitched above A-Ball as “high ceiling,” so Garcia and his 95 mph fastball can sit in this category.

MB – If he starts out well as a starter I’d trade him while value is high.

SD – Remember how I said there was a ton of debate on high ceiling, low floor players? Kevin, Kurt, Michael, and myself all have had him in a different category.

KH – Hayes is already one of the best defensive third basemen in the minor leagues and has posted high contact rates at the plate since entering pro ball. The question with Hayes has always been whether he can develop enough power to stick at third in the big leagues, but he’s only 20 years old and there is still plenty of time to dream as his 6’1” 210-pound frame fills out.

KH – Hearn throws really goddamn hard. While the Pirates are going to try their hardest to turn him into a starter, it’d be pretty fun to see him fire 100 mph. darts out of the bullpen.

AS – He’s the biggest wild card in the Pirates’ system. If he is stretched out to a starter, he could be elite. He has the type of fastball to be a great reliever too. Also has a good chance of fizzling out.

KC – This year’s Shiny New Toy is the flamethrowing Hearn, who sits 96-98 from the left side and has touched 100. He’s been babied with workload due to injuries, so this year will be crucial to see if he can blossom as a starter.  If he can’t, watching Hearn throw 100 mph gas from the left side could be the Pirates’ bargain version of Aroldis Chapman.

SD – The most exciting prospect in the system right now for me.

KH – Hinsz has the frame of an innings eater and showed flashes of potential last season. At this point, however, he’s a long way from the big leagues.

AS – He has a plus fastball but the offspeed stuff is lacking. He had an atrocious walk rate his first two years in the system, but only walked 2.4 per nine in 93.1 innings in A ball.

MB – The player from Montana not the player named Montana.

SD – 2017 will probably tell us a lot about where Hinsz is heading. I don’t think his ceiling is huge, but he still is young and projectable enough that he could end up a solid 3/4 type. I would be pleasantly surprised if he plays much higher than that.

MB – Have to root for the polished HS pitcher from PA.

SD – Not many people would project Kranick as having a big ceiling, but not many would have put a bunch of NH’s prep breakouts in this category either. Kranick is a long way off but there were some serious positives in his brief pro debut.

KH – MacGregor was a mystery when the Pirates picked him in the second round of last year’s draft and remains a mystery through his first spell of pro ball. He has a projectable frame, a decent fastball, and a good changeup, but is very much a project.

AS – If MacGregor grows into his 6’3” frame, he could be someone to keep an eye on. With a little more muscle, he might be able to get his fastball into the mid-90s consistently.

SD – Pirates missed out on their sandwich round moonshot on Nick Lodolo before going off the reservation with MacGregor. It’s time to trust the front office when they see something in a pitcher that others don’t.

SD – Ogle is a very interesting pick who is on my breakout watch for 2017 along with Escobar, Kranick,  MacGregor and possibly 5th round pick Blake Cederlind. Of that group, I would only give Escobar a higher ceiling than Ogle.

KH – Ogle is a projectable lefty in the Gulf Coast League who is very far away from the majors. Two years from now he could emerge as a legitimate prospect or fade into obscurity. How’s that for analysis?

MB – If he get control and learns a breaking ball to add to velocity and good change….

MB – Could be Corey Seager or Chase D’Arnaud.

KH – A serious 2014 shoulder injury could force Tucker to move away from shortstop, which would definitely diminish his value as a prospect. Still, the former first rounder has good speed, good hands in the infield, and the makings of a decent hitter. Gap-to-gap power could expand as the 20-year old grows up.

KC – If Tucker can stick at SS, that’s a huge boon right there.  I’m unsure if his repaired shoulder will allow him to.  Or if he outgrows SS, I’m not positive his somewhat anemic bat will play at another position.

AS – The former first round draft pick has a high ceiling, but he has not done a lot to wow people in his three years in the minors. Scouts worry that the switch-hitter will need to abandon swinging right handed. Stole 25 bases in 2015, but had more failure than success on the basepaths in 2016.