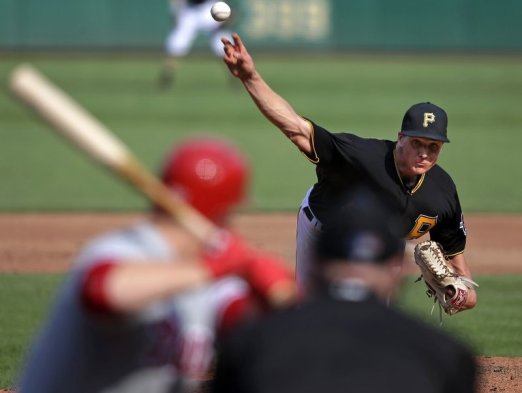 Tyler Glasnow didn’t get enough whiffs in 2017. How much did eye level have to do with it? Photo by Gene J. Puskar, AP

In November, I wrote a post on how Chad Kuhl ?s curveball turned him from a sinker/slider guy to a complete pitcher. In the second half of said post, I brought up Tyler Glasnow ? struggles and how he could benefit from a new pitch. I advocated for a slider and called it the ?Clayton Kershaw theory. ?

The goal of giving Glasnow a new pitch was simple: get more whiffs. According to Fangraphs, he got a swinging strike 8.2% of the time last season. The league average was 10.5%. Getting only three swings and misses at the same pace the league gets four extends at-bats, which leads to more hits allowed, more walks and more runs surrendered. If Glasnow is going to be a big league pitcher, this is step one.

Now he doesn ?t necessarily need to add a new pitch to click in the majors, but his repertoire is part of the problem. That power fastball was toothless last year, hitting 98 MPH only three times. His changeup was disappointing, even as a third pitch. The curveball looked good, but he could have used it better (more on that in a second). Right now, there ?s a more prevalent problem that needs addressed: the front office ?s pitching mentality.

Wednesday, Nate Werner of Pirates Breakdown took one of baseball ?s oldest adages- ?changing the batters ? eye level ?- and quantified it. He calls it Average Vertical Difference (AVD)- or the average difference in height in each sequential pitch of a plate appearance.

What he found was the Pirates weren ?t that hot in his new stat. Six of the eight teams who averaged at least eight inches in their AVD made the playoffs. The Pirates were a shade lower than 7.4 inches- 27th in baseball. If they improve to 7.8-8 inches, Werner theorizes that there would be a noticeable improvement in strikeouts, walks allowed and ERA.

Towards the end, Werner brought up Glasnow, who was the team ?s outlier for AVD. While most of his teammates hung around in the 6.5-8 inch range, his AVD was over nine inches. While that would be great in theory, he was still too predictable. Said Werner:

?If we look at the average vertical location of Glasnow ?s pitches, they are just 6 inches from the bottom of the strike zone. The average strike zone he faced was almost 22.5 inches. This means that Glasnow had about 16 inches of strike zone that he wasn ?t attacking frequently. ?

Check out the big brain on Nate! Here ?s the money sentence: ?[H]e ?s essentially walking a tightrope along the bottom edge of the strike zone and it ?s unnecessary. ? Statcast supports this theory, showing that Glasnow threw more than twice as many pitches in the bottom five quadrants than the top five.

Simply put, Glasnow should try attacking different parts of the strike zone. If walks are really an issue, pitching on the black is not the right call, especially with Francisco Cervelli and Elias Diaz ?s poor combined numbers on framing low pitches for strikes. It ?s also a lot harder to throw it by a batter when he can focus in on a certain part of the plate. So he ?s not getting calls and he ?s not getting whiffs. Like I said before, his walk problem is more than just poor control. He ?s neglecting 73% of the plate when his average is in the bottom six inches of the zone. I may have praised Anthony Swarzak and Tommy Hunter for zeroing in on one part of the plate, but they found a niche and exploited it. Glasnow doesn ?t have a niche.

I want to take Werner ?s idea a step further. His research shows the Pirates are one of the worst teams at changing a batter ?s eye level. I believe the team ?s infatuation with two-seam fastballs has something to do with that.

The two-seamer helped the Pirates go from a laughing stock to a playoff team in 2013. As their pitching mantras evolved over the years, the two-seamer remains the heart and soul. According to Fangraphs, only the Padres threw a two-seamer/sinker more often than the Pirates ? rotation in 2017.

Clint Hurdle has been an advocate for years of pitchers getting quick outs on three pitches or less for years. The two-seamer is the perfect ?pitch to contact ? offering. Sure, pitchers like A.J. Burnett can pick up strikeouts with it too, but it ?s the stereotypical ground ball pitch. Ivan Nova has thrown a ton of two-seamers in his time with the Pirates, and it ?s why he has found success in Pittsburgh.

Tyler Glasnow is not Ivan Nova. Every day the Pirates pretend that they can make him into Nova is a day wasted. Glasnow is a strikeout pitcher at his core. It ?s what got him drafted. It ?s what made him a top prospect, and eventually a major leaguer.

Glasnow started throwing a two-seamer for the first time last year anyway. The Pirates were taking him out of his element because they felt putting more emphasis on pitching to contact would help control his walk problem. Instead, the walk problem got worse (6.39 BB/9, which is by far the highest of his career), and batters feasted on his new pitch (a .370 average, a .616 slugging percentage and a 4.5% whiff percentage, according to Statcast).

It ?s not like Glasnow was having trouble reaching the bottom of the zone and needed a two-seamer. His curveball is one of the best on the team, but he almost always threw it when he was ahead.

Glasnow’s pitch breakdown based on count. Courtesy of Baseball Savant.

If he can learn to throw this on any count, he will be dominant. A mid to upper-90s fastball up in the zone and a curve with a 2500+ RPM rate in the lower part is the 1-2 punch he needs. What he doesn ?t need is to throw a get-me-over two-seamer that he runs to once he starts to get in trouble. He can ?t use the zone as effectively with the two-seamer. If he isn ?t using the zone, he ?s not getting swings and misses. If he ?s not getting swings and misses, he ?s a AAA pitcher.

I don ?t buy that all of Glasnow ?s problems are in his head or that moving him to bullpen will make him into the next Archie Bradley or Andrew Miller. There are a lot of guilty parties here. Some of it is his confidence and some of it is his stuff. Coaches and scouts can help fix those problems. But when the team ?s ideologies are getting in the way, then there is a problem.

Glasnow needs to use all of the zone to get strikeouts. Maybe he needs to add a new pitch to touch new parts of the plate, or maybe he can use his current repertoire to hit different spots more frequently. Either way, he won ?t ever be a pitch to contact guy. That two-seamer may work for most pitchers, but it ?s not going to give him the whiffs he needs.