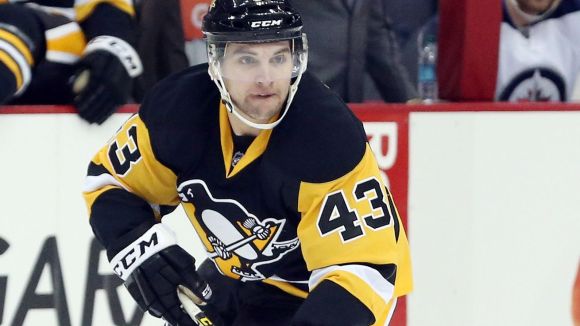 When Conor Sheary joined the Pittsburgh Penguins organization (on an American Hockey League deal with an Amateur Try-out Agreement) out of the University of Massachusetts-Amherst, no one batted and eyelash. The team captain for the Minutemen in their 2013-2014 season, Sheary led his team in points and assists that year. He also made the Florida Classic ?s All-Tournament team in 2011 as a sophomore and played his high school hockey for Cushing Academy.

After a stellar year in the AHL, where Sheary tallied 45 points in 58 games to lead the Wilkes-Barre/Scranton Penguins offensively, the organization re-signed him. This time his deal, inked on July 1, 2015, was for two years and two-ways. That meant the slight 5 ?-8 ? American forward out of Melrose, Massachusetts would be available to the NHL club in 2015-2016.

He started his NHL career slowly, bouncing up and down between the Pittsburgh and Wilkes-Barre/Scranton Penguins early in the season. When he first joined the squad he also showed a habit for deference. When he was on the ice with one of the team ?s elite players, like Sidney Crosby or Evgeni Malkin, he ?d pass everything to them. Partially due to this, Sheary bounced around until January when he was promoted full-time. During the Penguins’ monster second half, he became a fixture. He wasn ?t a call-up anymore, he was here for the rest of the Penguins ? season in Pittsburgh.

In this role he played on a rolling bottom-six that added the perfect counter punch to the star studded top-half of the line-up. But something was changing. Sheary was setting himself apart. He was more comfortable and settled. Then before anyone realized it, he was playing on a line with a double-shifting Sidney Crosby and showing promise. While the NHL at large was fawning over Shayne Gostisbehere and Artemiy Panarin, in Pittsburgh we were all zeroed in on Conor Sheary (and Bryan Rust).

In the middle of the Penguins first-round series with the New York Rangers, Conor Sheary got his playoffs moment. In game three, he ascended to the team ?s top-line. He was the guy with Sidney Crosby and Patric Hornqvist. He didn ?t just play, though, no he thrived. Whether it ?s his speed, his smarts, or just the fact that he ?s finally settled in it doesn ?t matter (though I ?m pretty sure it ?s his hockey IQ, that ?s what really makes or breaks Crosby linemates). What does matter is that the 5 ?-8 ? undrafted kid is following in the footsteps of some of Sidney Crosby ?s most prolific linemates, Pascal Dupuis and Chris Kunitz (coincidentally, both of whom were also undrafted).

Conor Sheary scored in both games four and five of the Penguins series with the Rangers. One off of a beautiful pass by Crosby. Showing, once again, that he belongs with the captain.

But what does this mean for the Penguins’ organization? What does the success of organizationally grown talent overall mean? Well it means they ?ve just done one of the most difficult things in hockey completely on the fly. Rebuild.

Yes, that ?s right the Penguins just rebuilt their team without anyone really noticing. Because not all rebuilds look the same. Some involve Maple Leafs and Sabres-style stripping of everything. Some, when you have stars like the Penguins do, just involve a series of decisions to find the right supporting cast and coaching staff. Only seven of the the players who skated for Pittsburgh in their final game of the 2015 playoffs were in the First Round’s deciding game 5.

Remember how the Blackhawks built their Cup winning teams? Relying on young guys on cheap deals while trading out older, favorably viewed semi-stars on more expensive deals to places looking for cup-winning veterans to help guide their young. Remember how the Lightning made the Cup Final last spring? Their young triplets line, that they depended on to bolster Steven Stamkos. This season alone, Rutherford has dropped the anchor that is Rob Scuderi ?s contract, while Martin was allowed to walk in favor of the cheaper Dumoulin, and the Penguins took on players with lower cap hits and control moving forward (Daley, Hagelin).

Sheary is symbolic of every decision that this Penguins regime has made right.

First, the team signed him to one, then another, low-risk deal. His current deal, the two year two-way pact signed last July 1, carries a cap hit of just $667,500. These low-risk, shorter term, deals are perfect. Because when a low-risk deal works like it has for Sheary and Matt Cullen, the team gets amazingly cost-effective secondary scoring and when it doesn ?t like last year ?s pacts with Downie and Lapierre, they ?re short-term deals that can easily be walked away from.

Getting the production out of Sheary for such a low cost is like having a free player on the roster. This will enable the Penguins to re-allocate tightly constricted salary cap dollars to another position of need in the offseason, as they have one less position to fill this summer.

Sheary, right now, is just what Sidney Crosby needs. Someone fast who will play the game at Crosby ?s preferred tempo but who also plays hard-nosed and can win puck battles with his brain as well as his speed. Kunitz has lost some of this speed as he ?s aged, while Sheary is still capable of zipping around like he ?s wearing a jetpack. Ultimately, that ?s the beauty of his ascension. He ?s come so far so quick because he was already used to working hard (undrafted, not signed to an NHL deal). Now he ?s just doing it alongside the world ?s best hockey player.

Leah is a hockey and city life contributor to The Point of Pittsburgh. She is a 2013 graduate from the John Curley Center for Sports Journalism at Penn State University.
Contact: Twitter