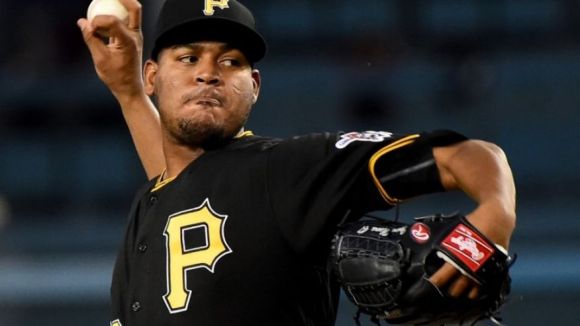 Nova will be a hot product on the thin market this offseason.

I’ve played this game with you before, loyal reader (maybe singular…hopefully plural). If the Pirates could design their version of a perfect pitcher, he would have the following characteristics:

All of the above characteristics (and the stats in parentheses) describe Ivan Nova. Obtained on deadline day for two players-to-be-named later (that were later named “Tito Polo” and “Stephen Tarpley”), Nova has been a revelation for the Pirates. He’s done everything that Alex specified he needed to do to be successful. If I had to recall a pitcher obtained at a trade deadline that was this dominant, I’d have to go all the way back to…last year. Nova, an underwhelming pitcher during his tenure with the Yankees, has been just as dominant as JA Happ, an underwhelming pitcher the majority of multi-stop career, was when he came here from the Mariners for Adrian Sampson last year.

And like Happ, Nova is a free agent at the end of the year, meaning that there is the very real, distinct possibility that some other team will reap the benefits of the Pirates’ mentoring. Look no further than Toronto where Happ signed a quell reasonable 3 year/$36M deal and is now right in the mix for the 2016 AL Cy Young (18-4, 3.33 ERA in 170 IP with 7.9 K/9, 2.6 BB/9). With the vast wasteland known as the 2016-17 free agent market, Ivan Nova has now positioned himself as perhaps the 2nd best pitcher on the market behind…wait for it…37-year old Rich Hill, who was pitching in independent ball in August 2015.

Nova’s stats with the Pirates are insanely good and not sustainable (the 0.52 BB/9 rate, .280 BABIP, and 78.8% strand rate are all bound to regress), much like Happ’s were last year. But that doesn’t mean he’s not a potentially viable pitcher for the Pirates moving forward. Perhaps the Pirates blanched at paying Happ because this year was his age-33 season and didn’t want to commit to a pitcher in his age-35 season. But Nova is three years younger; the 2017 season will be his age-30 season.

Even in the pitching-starved free agent market, it’s hard to see a team committing four years to Nova, but stranger things have happened. I’m also looking at him garnering about $14M a year, so a 3 year/$42M is where I would put his cut line right now. Long term, Nova is probably a #3-level pitcher, especially if he stays in the NL. Pitcher-friendly PNC Park is contoured perfectly for Nova, as fly balls go to die in left and center field that may be out in many other parks. Nova could probably get around $16M/year, but he has been a middling pitcher up to this point (career ERA of 4.29 with more hits allowed than innings pitched, making him more of a #4-level pitcher for me) and has had some injuries in his career, chief among them his 2014 Tommy John surgery.

Nova is clearly going to test free agency. He would be foolish not to at this point. But let’s say the Pirates are able to convince him to return for that 3 year/$42M contract I laid out. Not only will they have captured a pitcher that they rehabilitated, unlike Happ, but they’ll also quell the naysayers that spread like wildfire during the wildly-panned (but not at TPOP) deal to offload Francisco Liriano’s $13M salary for 2017 at the cost of two prospects that I don’t consider prospects in Reese McGuire and Harold Ramirez. They can bust two ghosts with one proton blaster.

By using their newfound “financial flexibility” to re-allocate Liriano’s salary line to Nova’s, the Pirates could enter 2017 with a 1-2-3 of Cole-Taillon-Nova. I would be quite happy to ride into the teeth of battle with that trio. In a perfect world, Tyler Glasnow would be slotted into that third spot, but his injuries and ineffectiveness in his brief trial have rendered him a question mark going into the offseason and a prime candidate to start 2017 at AAA again.

If the Pirates are truly committed to making a run in what I feel will be McCutchen’s final season as a Pirate, then they should lay out the cash for a pitcher that they have seen first hand his handiwork. Even with regression due next year, Nova can still be a key cog in the rotation and a much better alternative at the #3 spot than what they had at the start of 2016.