Not since the days of Craig Adams under Dan Bylsma have the Pittsburgh Penguins had a player that divided the fan base, the media, and even the front office and coaching staff the way veteran defenseman Jack Johnson has during the 2018-19 season.

Johnson, who played for the Carolina Hurricanes, Los Angeles Kings, and Columbus Blue Jackets prior to this season, inked a 5-year, $16.25 million deal with the Penguins in free agency on July 1st, earning him an annual salary of $3.25 million per year. In order to create enough salary cap room to sign the veteran left-handed defenseman, the Penguins had to trade Conor Sheary, Matt Hunwick, and a fourth-round draft pick in the 2019 NHL Draft to the Buffalo Sabres.

Since that day, Johnson has been bagged on repeatedly by fans and media members, while a small portion of the fanbase, a few media members, and the front office continues to go to bat for Johnson, making the case that he’s a fine player for a team that struggles to keep the puck out of its own net.

The “fancy stats,” courtesy of DK Pittsburgh Sports below, shows quite clearly that Johnson drags down not only his defensive partner, but the forwards on the ice with him throughout games. That has led to many people calling for the Penguins to sit or trade Johnson, while one fan on Twitter went as far as creating a GoFundMe page to help the Penguins buy out Johnson. 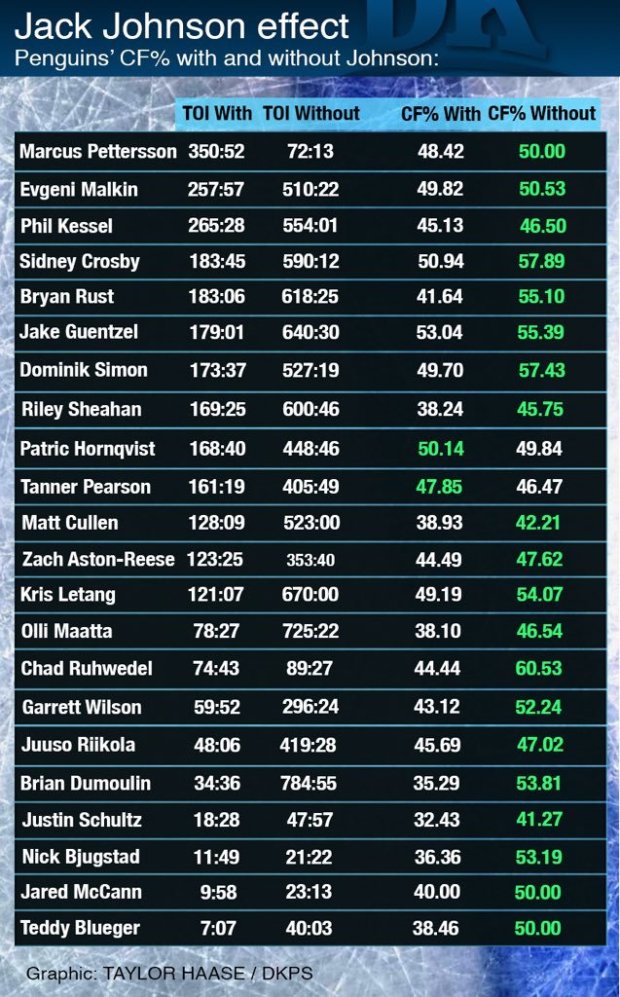 While Johnson has been mostly bad this season, he did play arguably his best game of the season Saturday in the Stadium Series loss to the Philadelphia Flyers. Yes, he was on the ice for the final two goals of regulation and was called for a bad penalty on Nolan Patrick, but the fanbase and some in the media have gone too far when it comes to bashing Johnson.

Enough, we get it already. He’s a bad defenseman that is an anchor on the books moving forward with no relief in sight. Harping on him and his play day after day is suffocating. When the fans talk about him repeatedly, it leads to those covering the team – like The Athletic’s Josh Yohe – writing an piece in which general manager Jim Rutherford went off defending Johnson and his play.

That, in turn, led to another cycle of discussions surrounding Johnson’s play and the supposed incompetency of Mike Sullivan and the rest of the Penguins’ coaching staff and front office when it comes to playing Johnson nightly. As a fanbase, we’ve gone around and around in circles discussing Johnson’s play since he signed that deal. Quite frankly, it’s exhausting. The Penguins are a mess right now, and Johnson’s play hasn’t helped much on the blue line, but he’s far from the only issue on the Penguins. Benching him or trading him before Monday’s deadline doesn’t miraculously fix the team.

This reminds me a lot of the Adams situation during the final days of the Bylsma experience, in which the coaching staff stubbornly trotted Adams out there night after night even when Adams showed he clearly couldn’t impact the game like he once did.

By no means is this a piece from me defending Johnson; he’s been the worst defenseman on the Penguins this season, by far. But I’ve grown extremely tired of the nightly bashing of 73. It seems as if the fanbase can’t watch the game without tweeting out clips of Johnson. Rutherford was right: Johnson was never given a fair chance. I’m not sure I’ve ever seen that with this fanbase, but it’s exhausting.

Josh is currently the Sports Editor of the Glenwood Springs Post Independent in Glenwood Springs, Colorado. Born and raised in Pittsburgh, Josh is a diehard Steelers, Penguins and Pirates fan. A graduate of Indiana University of Pennsylvania and Syracuse University, Josh also writes for Steelers Depot and 16 Wins a Ring.