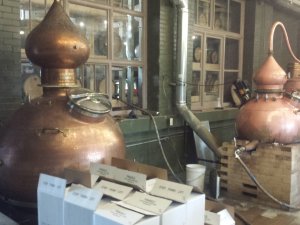 Award winning rum has been coming out of these copper kettles since October 2013.
Photo by Alex Stumpf for TPOP

Tim Russell, the founder, owner and head distiller of Maggie’s Farm Rum, does not always dress the part. With the doors open to those looking to buy a bottle on a Wednesday afternoon and expecting a shipment later, he walks around his establishment in a plain white t-shirt and gym shorts. His attire is closer to the fourth job he jokes he has: janitor.

However, it has not been Russell’s dress but rather his product that have had people flocking to the Strip District the last three years, where the craft rum distillery serves award winning drinks.

“A lot of the trends with craft spirits were following behind craft beers, so I had a good eye on that,” Russell said. “We’re putting that craft beer spin on things. This is the next step.”

Russell had worked for a defense contractor before getting laid off and abandoning the field to start the framework for Maggie’s Farm. He attend the Feebles Institute for their inaugural craft distillation course in May of 2011.

After the Commonwealth started to allow the direct sale of spirits, Russell became a member of the American Distilling Institute, getting rum specific training. With the change in the law, he was convinced to pursue rum over beer. As the publisher of Craft Pittsburgh Magazine, he had his thumb on the pulse of the craft scene in the city and was convinced it would succeed.

After failing to get a loan, which would happen five times in their three year history, Russell decided to cash in his 401K, sell his house and move into an apartment closer to the city, living off of the money he made from the magazine. All told, he had about $100K available.

Finding a place took him a year and a half.

“It was sort of a Goldilocks situation,” Russell said. “I needed a place large enough to support the manufacturing aspect of it, but still small enough that it was affordable and a retail space.”

The search resulted in setting up shop at 3212A Smallman Street. The blue bricked building with the hand painted “the rum room” sign hung on the side came when that part of the Strip District was still uninhabited.

Inside, the 100 percent copper stills are visible from every part of the bar or booths. The walls are decorated with local art, foreign currency above the bar and a “Rum- Make America Great Again!” sign that has the “T” and “P” scribbled out.

Photo by Alex Stumpf for TPOP

Maggie’s Farm got its liquor license in October 2013. They were selling bottles by Black Friday and opened the bar in January 2014. Bottles are sold Wednesday through Sunday while the bar operates on the weekend and ‘unofficially’ Sunday.

It was the first commercial producer of craft rum in Pennsylvania since at least Prohibition.  Russell’s bet that there would be a market has paid off.

“There was enough interest here that people were willing to pay to try it out, and they’ve been coming back for three years,” Russell said.

While that does contribute to a higher price tag than most commercially produced rum, Russell said it is on par, if not a bit cheaper, than its craft counterparts. An unaged 750 ml bottle runs between $28-35.

The extra cost has been worth it for customers to partake in their award winning rum. Maggie’s Farm (Allegheny Distilling) was named the Pennsylvania Distillery of the year in 2014 in the New York International Spirits Competition and five of their rums have combined for 23 accolades since then.

The lion’s share of those awards have gone to their Queen’s Share. Russell learned the process from a master distiller named Eric Watson, who himself had it passed down from Jamaican distillers.

A rum consists of three parts: the head, the heart and the tail. The tail is the final part, and it’s where the flavors are located. Most distillers throw the tails into the next batch because there is still alcohol in them, but those tails are instead set aside for its own batch of Queen’s Share. It gives the beverage more body and character while also being smoother despite being sold at a higher alcohol content, usually in the 110-120 proof range.

The Queen’s Share has won 13 awards from four different sources over the last three years.  It takes about 10 batches, which usually take about 2-3 weeks each, to get enough tails for an unaged Queen’s Share. Aging it takes another year or two.

“It’s a process that’s really disappeared, and the people who know about it are trying to bring it back a little bit,” Russell said.

Maggie’s Farm has started to expand outside the Pittsburgh area. It can be shipped to anywhere in the state, and now it can be found at stores, bars and restaurants in Philadelphia. They recently just signed a deal to have it sold in Nashville as well, with an expansion in Washington D.C. soon to follow.

While Russell said he would like to expand to bigger markets like New York, he wants to make sure that he does not stretch himself thin and have his rum get buried under the competition.

“There’s no point in being in 10 to 20 markets and only selling a case a month to each state when you can sell 10 cases to one state and gain traction and grow favorability,” Russell said. “You build a really good consumer market, care about that and hope to get a good return.”

While they plan to continue to expand, Russell remains adamant in adding different spirits. Maggie’s Farm will be adding liqueurs either in the last two months of 2016 or in early 2017, but they will still be rum based.

“I always felt that you should do one thing and do it right,” Russell said.

Alex is a Pirates and Duquesne basketball contributor to The Point of Pittsburgh. He graduated from Point Park University with a degree in Journalism and Mass Comm. and a minor in English in 2014. Everything can be explained with numbers. If you want to keep up to date on both teams or have a story idea, you can follow or reach him @AlexJStumpf.
Contact: Twitter