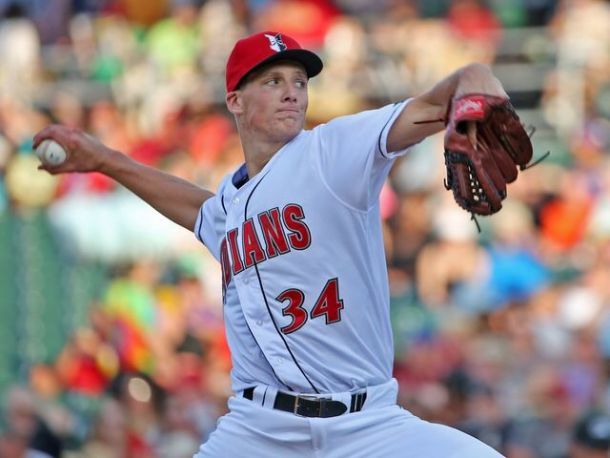 Glasnow is on the precipice of the Majors. Will his value equate to what pitchers of his caliber have contributed in the past?
Photo by Kelly Wilkinson/Indy Star

When the first article on your new website spreads like wildfire, it’s both heartening and daunting at the same time. In December 2014, we launched The Point of Pittsburgh and the first article was How Much Is An MLB Prospect Worth. Its success made Steve and I realize we were right in that there was a large audience waiting for good analysis from TPOP. The article has been featured in the Washington Post, virtually every MLB team’s website on SB Nation, various team message boards, and most prominently on Fangraphs across multiple articles.

But with all models, they must constantly be refined with new and revised input data to stay up-to-date. For this update, we examined every facet of the model to see what needed tweaked. What follows is the methodology behind the concept of surplus value and what was changed. You can always click the link above to see the original and how things progressed.

What Is Prospect Surplus Value?

Youth is the currency of choice in Major League Baseball. Years of control and the ability to pay a player at depressed wages, both at minimum scale and arbitration rates, is the key for a team seeking to get high value from players. If you have some key players making little money, it can help you address other needs in free agency at inflated prices. It’s how bottom lines are balanced.

Teams control players for six full seasons, typically with three of them at minimum salary and three at arbitration rates, which are a fraction of a player’s worth on the open market. There are tricks that all teams employ to squeeze a little bit more than six seasons out of a player, like waiting until a few weeks pass to bring him up and thus not have the player get a full season (like Kris Bryant and the Cubs) or waiting until the Super 2 deadline passes in late June to avoid paying arbitration four times (like the Pirates and other teams with virtually all their top prospects).

So if a team is assessing how much a prospect is worth when discussing him in a trade, they have to calculate what value that player may contribute to the team for his six seasons of control in the future. Teams are employing some type of financial analysis to do this. At TPOP, we did ours on a present worth value model where future values over a period of time are shunted forward to present-day in one lump sum. The player’s potential earnings are then subtracted from the present worth number to obtain surplus value, or the amount of value that a team places on that asset when discussing him in potential trades.

What Is The Source Data?

Since 1990, Baseball America has been ranking the Top 100 prospects across baseball. I have always viewed Baseball America as being very middle-of-the-road in their analysis, in comparison to other sites that skewed too heavy in potential and tools. Plus, they’ve been doing it longer than other places, so there’s more of a body of work to draw from.

The initial iteration of this article mined the data from the 1994 to 2005 Top 100 prospect lists and put the players into different tiers for analysis, based on being either a hitter or a pitcher and their rankings. Since a shade over a year has passed, we included the 2006 Top 100 prospects, too. The thinking is that a player on the 2006 list probably graduated from the minors no later than 2009, then spent 2010-2015 accruing their six full seasons with their team, thus giving us the proper amount of WAR they generated for their team(s) while under team control.

How Was Player Value Calculated?

We used Fangraphs for the Wins Above Replacement (WAR) generated by a player during their six seasons under team control. Allowances were made for the partial seasons that teams got by calling players up later in the season.

How Was Player Worth Calculated?

It has been assumed through the analysis of free agent contracts that the cost to purchase 1 WAR on the free agent market is now around $8M. The initial article used a figure of $6.5M/WAR, so this has been modified to fit the new figures. So the player’s six (plus) years of team control WAR were added up, multiplied by $8M/WAR, then brought to present value with a discount value of 8%. I briefly toyed with lowering the discount value (the compound interest from year to year), but ultimately decided against it because of the new Collective Bargaining Agreement on the horizon. I think with all the money currently in the game, player salaries are going to be escalated through the new CBA, thus increasing the cost per WAR.

How Were Player Values and Costs Distributed Over 6 Years?

Originally, we made the non-quantified observation that approximately 2/3 of a player’s value was achieved in the arbitration years of team control. Now after re-assessing the data, we have scaled that figure back to 3/5 during arbitration. Additionally, we crunched the numbers on player contracts that went through arbitration in last week’s article and came up with arbitration values of 25/40/60% for the three arbitration years. This averages out to 42%, rather than the 60% we previously assumed with the 40/60/80 model.

So Surplus Value Is…

The present worth value calculation minus the amount of potential salary that a team has to expend over the three minimum salary years ($1.6M) plus three arbitration years (3/5 of present value WAR x 42% x $8M per WAR). The results for the hitters and pitchers, broken down by the various tiers, are shown below:

As with the original article, the best bets for prospects still remain the elite #1-10 hitters and pitchers. It amazes me with all the volatility around pitchers, due to potential injuries and ineffectiveness, that pitchers #1-10 have the lowest bust rates of all tiers. You know that you’re at least getting a bullpen-caliber guy (less than 3 WAR) and a pitcher won’t outright bust (Jesse Foppert came oh so close with 0.1 WAR).

There also remains little difference between both hitters #51-75 and #76-100, as well as pitchers #51-75 and #76-100. Again, moving forward at TPOP, we’ll lump both groups in as #51-100 prospects within their respective hitter/pitcher groups when discussing surplus values.

The hitters #11-25 and #26-50 raised their average WAR totals up slightly due to the influx of the outstanding 2005 1st round draft picks. Ryan Zimmerman, Alex Gordon, and Troy Tulowitzki all raised up the #11-25 tier (with their placements reflecting their advanced college nature), while Cameron Maybin, Ryan Braun, and Andrew McCutchen bolstered the #26-50 tier. It’s a little surprising that Braun wasn’t up higher, but there were always concerns about his ultimate defensive position, which may have hampered his ranking.

But the big takeaway from all this is how the surplus value of prospects of any ilk has increased, due to the rising market costs to acquire talent in free agency and how little these players are paid in relation to free agency prices. This is why teams are so reticent in recent years to part with high-end talent, even in light of the shockingly high bust rates shown in the last two columns of the table for certain tiers. If a player hits, it’s a goldmine for the team.

Baseball America unveiled their 2016 Top 100 prospects list a few days ago. Four Pirates made the list at the follows positions and their corresponding surplus values:

Josh Bell has nearly equal value as Glasnow, with the hitter #26-50 having nearly the same bust rates as Glasnow’s pitcher #11-25 tier, but Bell’s bust rates are double Meadows’s chances to accumulate 3 WAR and quadruple his rate to accumulate zero or fewer WAR.

Not just for Pirates but for all players, it’s important to trendline how a prospect is moving through the course of these lists from year-to-year. If a player is sliding down, by all means consider moving him, especially any player ranked in the back half of the list. This year, Taillon dropped off the list from #29 in 2015, but that’s what happens when you don’t competitively pitch for two years. Reese McGuire also dropped off from #97, which happens when you can’t even hit for a 600 OPS, no matter how great of defensive abilities his supporters trumpet that he has.

In the end, all prospects are lottery tickets. Our work merely shows that some have better chances of “hitting the lottery” than others.