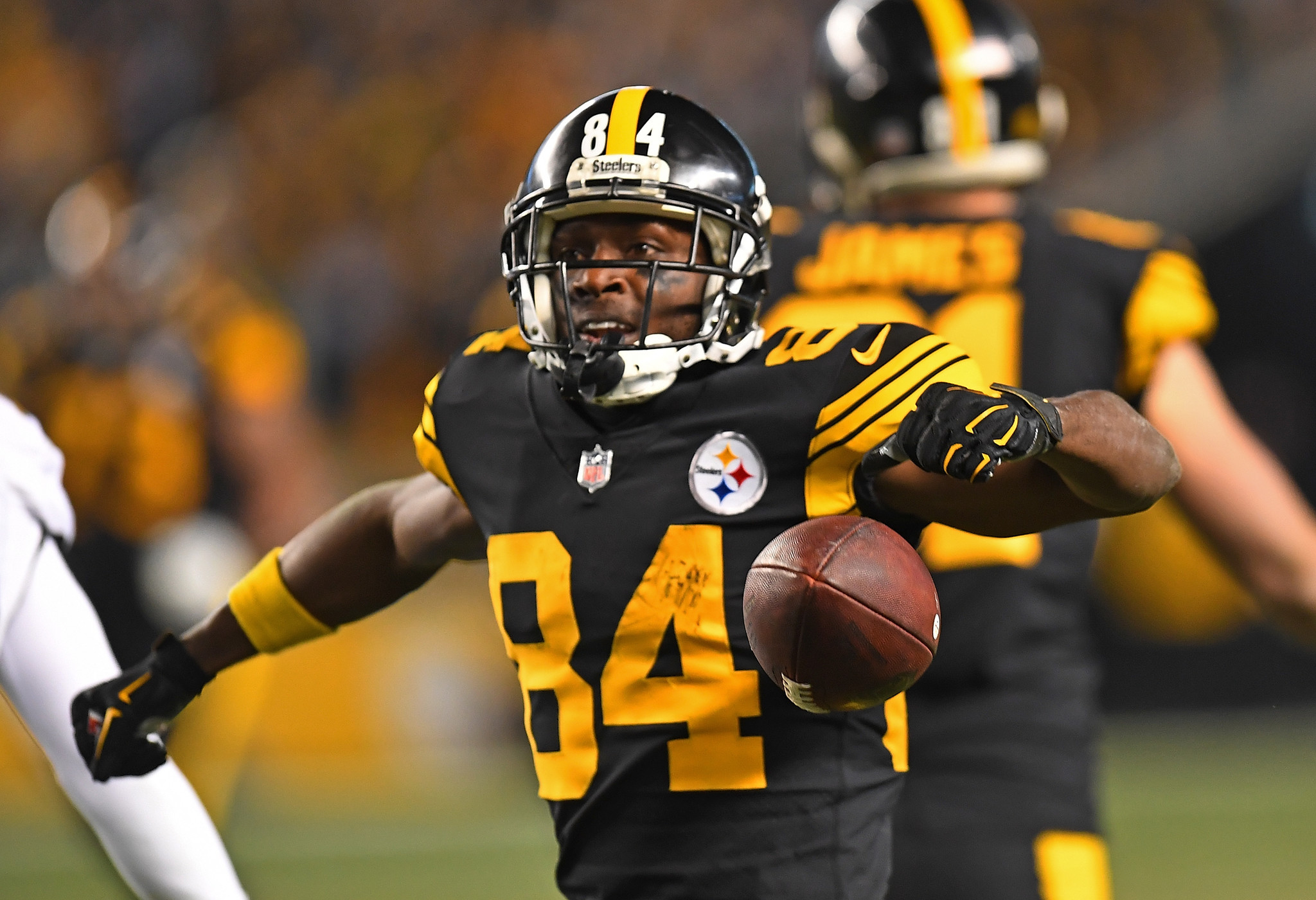 In game that will go down as one of the greatest offensive exhibitions in the history of the Pittsburgh Steelers and Baltimore Ravens rivalry, at the end it was defensive rookie TJ Watt’s game winning sack that made the difference, as the Steelers captured their second straight AFC North crown with a hard fought 39-38 victory at Heinz Field on Sunday night. Both the Ravens and Steelers combined for 986 yards of total offense.

The Steelers started off strong as Ben Roethlisberger and his offense successfully converted Sean Davis‘ interception into a 58-yard scoring drive. That drive ended with a 20-yard touchdown by Steelers All-Pro running back Le’Veon Bell, giving the Steelers the early 7-0 lead to start the contest. After the Steelers successfully force the Ravens to punt on the next sequence, the Steelers controlled time of possession early in the second quarter. After completions to tight Vance McDonald and a 28-yard completion to All-Pro receiver Antonio Brown, a 12-play 90 yard drive was capped by Bell’s 1-yard touchdown, giving them a 14-0 early lead.

Throughout the course of the game, the Steelers defense had few answers for Ravens quarterback Joe Flacco‘s passing attack, as he often exploited the middle of the field with the absence of beloved linebacker Ryan Shazier, as well as the deep in the corners. On the next sequence following Bell’s touchdown, Flacco completed a 30-yard touchdown to Ravens receiver Chris Moore, cutting the Steelers lead to 7. After Steelers kick Chris Boswell‘s field goal gave the Steelers a 17-7 lead, the Ravens potent offensive attack struck again as Ravens running back Alex Collins broke tackles from linebacker Arthur Moats and Davis for a 33-yard gain. Collins then completed the drive with an 18-yard touchdown, cutting the Steelers lead to just 3. After another Boswell field goal, the Steelers went into halftime with 20-14 lead.

In the second half, the Ravens kicker Justin Tucker kicked a 47-yard field goal to cut the Steelers again to just 3. After forcing the Steelers to punt on the next series, Flacco and his Ravens made few mistakes on their drive, which included a completion to receiver Jeremy Maclin for 19 yards, and to running back Javorius Allen for 12 yards. This culminated in Allen’s 1-yard touchdown, giving the Ravens the lead. After a another failed offensive series, the Ravens capitalized with a 74-yard drive, giving the Ravens a seemingly commanding 31-20 lead before the end of the quarter.

After a pass inference call put the Steelers offense in the redzone, Roethlisberger completed 1-yard touchdown to fullback Roosevelt Nix; after the failed 2pt conversion, the Steelers cut the Ravens lead to just 2. On the next series, the Ravens offense was able to convert a 20-yard pass interference penalty into points, as Allen’s 9-yard touchdown gave the Ravens a 38- 29 lead with only 6:44 remaining in the contest.

On the next offensive series, Roethlisberger completed passes to Brown, James and Bell, and eventually scored on Bell’s 11-yard touchdown run, cutting the Ravens lead to just 2 late in the fourth. The Steelers defense came through on the next Ravens possession to force a punt with only 2:34 to go in the contest. After a Terrell Suggs sack and small completion to James on 2nd and 19, Roethlisberger was able to find James again down the middle for a huge 16-yard gain, extending the drive.

On what would be the most important defensive sequence for the Steelers, rookie TJ Watt collected his 6th sack of the season on Flacco, ending the Ravens drive and helping the Steelers clinch their second straight division title.

With a performance that would surely place him in the discussion for NFL MVP, Antonio Brown finished the game with a season high 213 receiving yards on just 11 receptions. Though many had questioned his desire and ability to continue playing at the beginning of season, Ben Roethlisberger came through with his best game for season, completing 44 passes on 66 attempts for a game high of 506 yards. Tight end Jesse James came up with big catches late in the game and finished with a season-high 97 receiving yards. Similarly, tight Vance McDonald came up with a big catch early in the game and finished the night with 52 receiving yards. Kicker Chris Boswell was perfect on all field goal attempts and extra points, accounting for 15 of the Steelers 39 points on the night. Lastly, All-Pro running back Le’veon Bell had a seemingly pedestrian day rushing with just 48 yards on the ground; however, he accounted for 2 rushing touchdowns and one receiving touchdown, giving him 3 touchdowns on the night.

On defense, safety Sean Davis had an active night, accounting for 12 total tackles, a pass deflection and an interception at the beginning of the game. Rookie outside linebacker TJ Watt accounted for 4 tackles and the game-clinching sack. Linebacker Vince Williams accounted for 7 total tackles, while cornerback Artie Burns finished with 2 tackles and a pass deflection.

There are so many words to describe this game, but perhaps the word I can find also describes the person they paid tribute to before the commencement of the game, and that word is resilience. For Steelers fans familiar with this rivalry, it is inevitable that these games come down to the last possession; the team that generally prevails at the end is the team that wins the possession battle. With this noted the Steelers defense, who had perhaps their worst showing in recent history, came through when it mattered the most.

For those who feel the need to get into details of what went wrong with this defense, we must start from the beginning. Coming into this contest, the Steelers defense had an uphill climb against a Ravens team that had been surging the last few weeks. With the absence of the beloved Ryan Shazier, the middle of the field was surely to be exploited with Sean Spence present. With the absence of Joe Haden, the secondary was vulnerable all game long. Lastly, the Steelers front seven gave Flacco the one thing that a quarterback of his caliber should never have — time and space. With the array of errors, deficiencies in the secondary, missed tackles as seen in Wallace’s 40-yard reception, one may ask “How can this team be ready for a juggernaut like the New England Patriots?”

To me, the key is whether this team believes within themselves they can win, regardless of what others may believe. Many in the NFL world have already predicted that this team will lose in spectacular fashion to the Tom Brady-led Patriots. The one thing I know is this — the Steelers for the last 8 weeks have found a way to win. If we were judging by style points, this team perhaps should not be AFC Champions again. The reality is that perhaps after so many weeks of finding ways to win, it could just be the fact that this team is much better than some give them credit for. So with all this said, the Steelers are a team on a mission not only to bring the Lombardi trophy back to Pittsburgh, but to quiet all those that counted them out, which would include some in this fanbase. As it stands, this team is on a mission and they have the players, personnel and coaches to make it happen.

Steelers Play of the Game

With so many great catches made by Antonio Brown in this game, this one stood out as it came late in the game with the Steelers down by 2.

Born and raised Ottawa, Ontario Canada, Kelly is a Steelers contributor to The Point of Pittsburgh. Formerly a contributor for SBNation's 'Behind the Steel Curtain'. Kelly can be reached via the Twitter handle @kanozie80