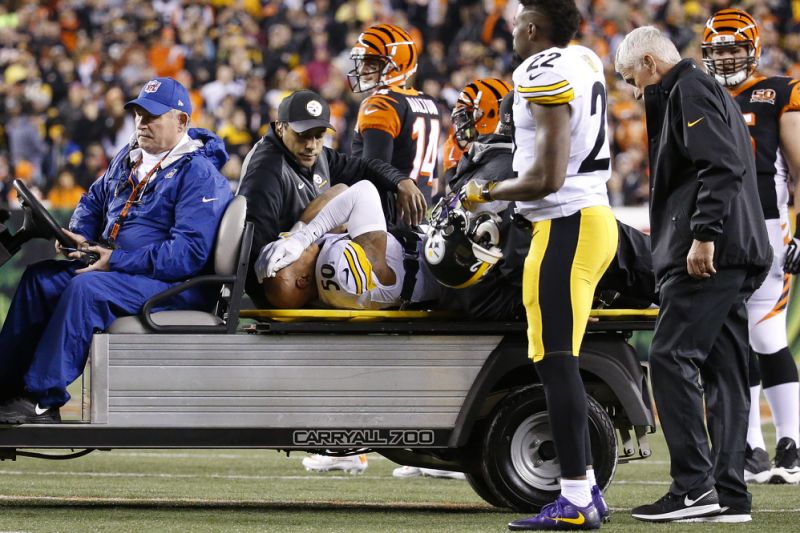 Ryan Shazier has a spinal contusion, but his short and long-term health are still in question.

In front of capacity crowd Monday night at Paul Brown Stadium in Cincinnati, the Pittsburgh Steelers overcame tragedy and a large deficit to put together one of the most awe-inspiring and inspirational comebacks in recent history, as they defeated their AFC North rivals Cincinnati Bengals 23-20. With this victory, the Steelers extended their winning streak to 7 games, while improving their record to 10-2 and establishing themselves as one of the premier teams in the NFL.

On the Steelers first offensive series, Bengals cornerback Adam Jones intercepted a Ben Roethlisberger pass intended for Steelers receiver Eli Rogers. On the ensuing Bengals drive, the collective hearts of Steelers fans everywhere dropped as linebacker Ryan Shazier’s hit on Bengals running back Giovani Bernard caused him to grab his lower back and lay on the ground. The injury was disturbing in nature as Shazier carted off with no positive signs of any movement in his lower extremities.

With the absence of Shazier, Bengals quarterback Andy Dalton was efficient in the first half, as he completed several passes in the middle and deep to Bengals tight end Tyler Croft. Unable to convert, the Bengals settled for the field goal to take the early 3-0 lead in the contest. After failing to score on the next offensive sequence, Dalton’s offense took advantage and successfully completed a 12-play, 85 yard drive to extend the lead to 10. In the second quarter, the Bengals offense once again dominated time of possession and continued to exploit the middle of the field. A 15-yard touchdown to All-Pro receiver A.J. Green capped off a 6 minute drive, giving the Bengals a commanding 17- 0 lead. Before heading into halftime, the Steelers offense managed to put some points on the board, as a 33-yard completion to All-Pro running back Le’Veon Bell helped set up a Boswell field goal, giving the Bengals a 17-3 lead heading into half time.

In the second half, the Steelers defense came up big and forced the early 3-and-out. On the ensuing offensive series, Bell’s tight rope 33-yard touchdown helped cap off a 9-play, 75 yard drive to cut the lead to 7.

On the following series, the Bengals offense drove downfield, but the Steelers defense was equal to the task as they held the offense to a field goal, giving the Bengals a 20-10 lead heading in the last quarter of the game.

After successfully forcing a 3-and-out on the Bengals offense, the Steelers offense put together a promising 11-play, 74 yard drive in which the Steelers settled for a field goal, cutting the Bengals lead to 7. The Steelers defense came big on the following Bengals series, as Steelers linebacker Vince Williams collected his 7th sack of the season, helping to force yet another unsuccessful offensive series. On this ensuing drive, the Steelers offense made no mistakes as several successful passes and miscues by the Bengals defense resulted in a 6-yard touchdown reception to All-Pro receiver Antonio Brown, tying the game at 20 a piece. With only 3:51 left in the contest, the Steelers defense forced a crucial 3-and-out series, punctuated by outside linebacker Bud Dupree‘s 5th sack of the season.

On the final drive of the game, Roethlisberger completed back-to-back first down passes to receiver Martavis Bryant and Bell, eventually helping get the Steelers into field goal range, where Boswell completed the improbable comeback with a 39-yard field goal, stealing a 23-20 victory from the Bengals in front of their home crowd.

On offense, the story was running back Le’Veon Bell, who accounted for 182 all-purpose yards and made the crucial run to put Boswell in range to kick the winning field goal. Chris Boswell for the second straight week came through when it counted most, accounting for 11 of the Steelers 23 points and the game winning field goal. After a tough start, Ben Roethlisberger came through completing 50 percent of his passes, and reaching the 50,000 passing yards plateau in the process. With 101 receiving yards on the night, Antonio Brown surpassed Hall of Fame receiver Marvin Harrison for the most all-time receptions and receiving yards in a 5-year span. Receiver Martavis Bryant once again came through in the clutch with a huge reception to start the drive leading to Boswell’s game-winning field goal.

On what may have been the most difficult night from an emotional standpoint, the Steelers defense showed intestinal fortitude and the ability to overcome obstacles as great as the one they experienced tonight. Standouts on defense included linebacker Vince Williams who accounted for 9 total tackles and a sack. Cameron Sutton played a strong game in place of fellow cornerback Coty Sensabaugh. Outside linebacker Bud Dupree record 2 tackles and a crucial sack late in the game; and linebacker Tyler Matakevich, who perhaps had the toughest task in replacing Shazier, represented himself well with 7 tackles before leaving the game with a shoulder injury.

There comes a time when we have to take a moment, pause and put things into perspective. Football is a sport and really just a sport. As spectators, we invest time and money to support our team, conscious of the fact that anything can happen at any given time. When an injury of the nature suffered by Ryan Shazier happens, I believe as fans we have the responsibility on putting aside our fandom and remember what is more important in life. Shazier is married with a child and when his career is over, he has an entire life to live as a father. The only thing we can hope for, despite the brutal nature of this sport, is each person can walk away from the game able to fulfill their duties as fathers.

When that injury occurred, I right away reflected on the reasons why quarterback Ben Roethlisberger was reluctant to come back. The unpredictability of this sport is one that can give seemingly the strongest man anxiety. As much as I want this Steelers team to win, my desire to see them come away each game unscathed supercedes it. Others may not see it the same way which is understandable as the level of passion of the game differs in all people. At the end of it all, these kids we see every Monday, Thursday or Sunday put their bodies on the line to represent an entire fanbase. When I think about that, I have nothing but the utmost respect for each any everyone of them.

Steelers Play of the Game:

Born and raised Ottawa, Ontario Canada, Kelly is a Steelers contributor to The Point of Pittsburgh. Formerly a contributor for SBNation's 'Behind the Steel Curtain'. Kelly can be reached via the Twitter handle @kanozie80