It’s a common refrain among fans, both casual and diehard, of the Pittsburgh Pirates baseball organization — THEY NEED TO SPEND MORE MONEY ON PAYROLL!!!

When you press someone on how much, they’ll make references to spending an amount that would be far out of line with Pittsburgh’s market dynamics, based on revenues available to them. I’ve written about the Pirates payroll (a lot) and it has started to seep into the general fanbase’s consciousness. Payroll should be around 50% of total revenue, but in recent years it has trended down league-wide into the low 40’s percentage range.

But to try and quell the savage beast, at least for one day, I decided to go back five seasons to see if there was any effect on how much a team’s payroll was and how many wins they produced. Much like the character that Sean Penn probably tries to deny that he ever played, yes there will be math on this quiz. I’ll show each year in MLB, how many wins each team produced, and how much payroll would have needed to be spent to achieve 90 wins (the typical threshold to get into the playoffs). And of course, we’ll compare the Pirate payroll to that 90-win mark.

I’ve arranged it so that the teams are in order based on their win totals. Opening Day payroll figures are from Cot’s Contracts. Teams highlighted in orange are NL playoff teams, teams in blue are AL playoff teams. Then each dataset is charted and a linear regression line is placed on the data for correlation purposes.

If you haven’t done work with regression lines before, what you want to focus on is the R value. That gives you the “confidence factor” in the dataset. Typically, you want that number to be at least 0.70, preferably 0.80. So a 0.05 is awful. It’s basically telling you that it is a collection of randomness thrown up on a grid with some axes.

This has to do with the fact that teams could spend a grotesque amount of payroll (Yankees, $209.8M), while a team with a pauper’s payroll (Oakland, $52.9M) could get virtually the same number of wins. It also applies to the other side of the spectrum. The Astros and their $60.8M payroll had just as terrible of a season as the Cubs and their $109.3M payroll. At least the Astros got the memo that if you’re going to suck, suck on a budget.

How much would 90 wins cost? Using the equation on the linear regression line, where ‘x’ is number of wins and ‘y’ is payroll, a payroll of $106.8M would get a team to 90 wins in this highly theoretical equation. The Cardinals, with their $111.9M payroll and 88 wins, best exemplify that equation.

How did the Pirates compare? As the youthful Pirates were building up their core towards the three years of playoff appearances, their payroll was only $51.9M and they got 79 wins. Their payroll was 48.6% of the magical $106.8M number. By the equation, if a team in 2012 wanted 79 wins, they could have spent $98.9M. So, the Pirates were efficient in their bad win total, at least.

How did the playoff teams compare? In 2012, 6 of the 10 playoff spots were occupied by teams with payrolls less than the theoretical $106.8M playoff threshold payroll figure. The World Series was won by the Giants over the Tigers, so two big money teams did square off in the final series. 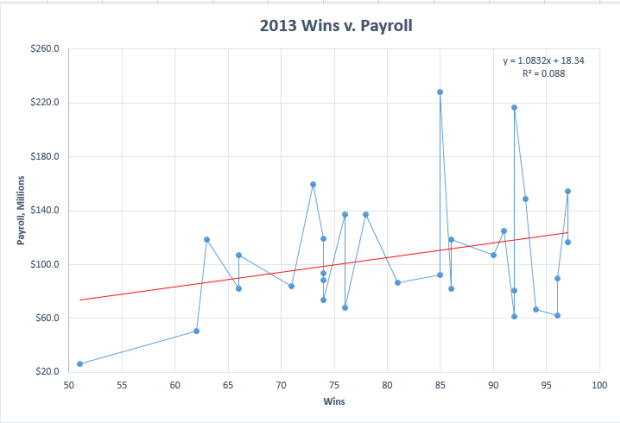 Again, the dataset is unreliable, as the R value of 0.088 is screaming out “don’t bother with me!” Payrolls continue to fluctuate wildly, including the utterly amazing $26.1M that the Astros spent to get just 51 wins. You’ll never see a number, both empirically and adjusted for inflation, that low for MLB payroll again.

How much would 90 wins cost? Using the equation on the linear regression line, a payroll of $115.8M would get a team to 90 wins in this highly theoretical equation. If you feel that the Reds at 90 wins and $106.9M are more emblematic than the Nationals with their 86 wins and $118.3M, that’s a matter of preference. But the Reds did get in the playoffs, so…

How did the Pirates compare? The Pirates had an amazing season of 94 wins, only to finish behind their nemeses the Cardinals (a recurring theme), with a payroll of $66.8M. That figure is 57.6% of the 90-win payroll figure.

How did the playoff teams compare? Again in 2013, 6 of the 10 playoff spots were occupied by teams with payrolls less than the theoretical $115.8M playoff threshold payroll figure, with the Cardinals just barely above it at $116.8M. The World Series was won by the big money Red Sox over the relatively median payroll Cardinals. 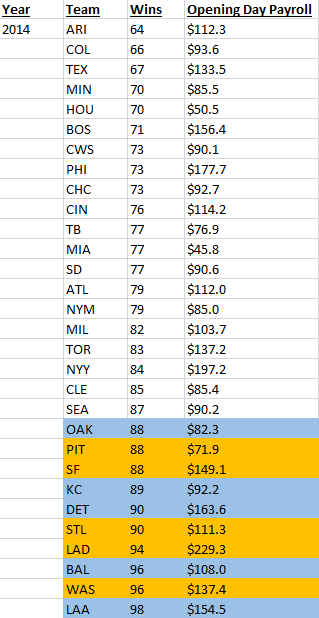 Hey look, another unreliable dataset (although it’s improving modestly). I’m sure that both Arizona and Texas had grander designs on how to spend $112M and $133M, but finish with less than 70 wins.

How much would 90 wins cost? Using the equation on the linear regression line, a payroll of $126.2M would get a team to 90 wins in this suspect theoretical equation. There’s not really a good matchup in this dataset, so I guess the Cardinals at 90 wins and $111.3M is the closest choice.

How did the Pirates compare? The Pirates comfortably got into the playoffs with 88 wins on their $71.9M payroll. Their fate was determined by the demi-god known as Playoff Madison Bumgarner. Their payroll was 57.0% of the $126.2M figure from the chart — the second consecutive year for that percentage.

How did the playoff teams compare? Five of the 10 playoff spots were occupied by teams with payrolls less than the theoretical $126.2M playoff threshold payroll figure. The Giants, with a sizeable payroll, beat the Royals, with a puny $92.1M payroll in the World Series. The Royals, long the doppleganger of the Pirates in the American League, gave hope to all small revenue teams. 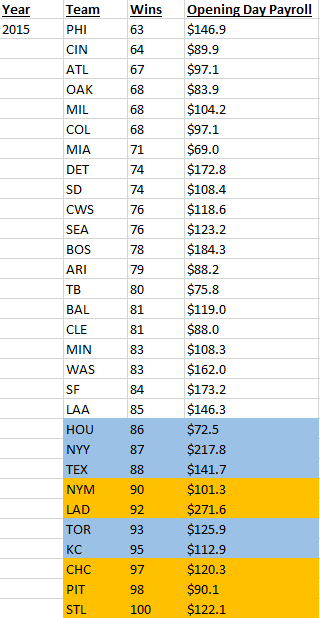 Let’s all take a moment and marvel at the Phillies and how they incinerated over $146M to barely avoid 100 losses. Probably should have started the rebuild a year or two sooner, eh Ruben? And yeah, we see you, Dodgers.

How much would 90 wins cost? Using the equation on the linear regression line, a payroll of $133.8M would get a team to 90 wins in this suspect theoretical equation. The Rangers and their $141.7M and 88 wins lines up nicely.

How did the Pirates compare? The Pirates had probably their best team, both on paper and in play, since the 1979 World Series team (yes, even better than the 1990-92 squads) for just $90.1M of payroll. It was a bitter pill to swallow when their 98-win team was consigned to the Wild Card coinflip game. Their payroll was 67.3% of the $133.8M figure.

How did the playoff teams compare? Seven of the 10 playoff spots were occupied by teams with payrolls less than the theoretical $133.8M playoff threshold payroll figure. The Royals, in the World Series for the second consecutive year, beat the Mets, neither of whom had payrolls that were drastically much more than the Pirates. 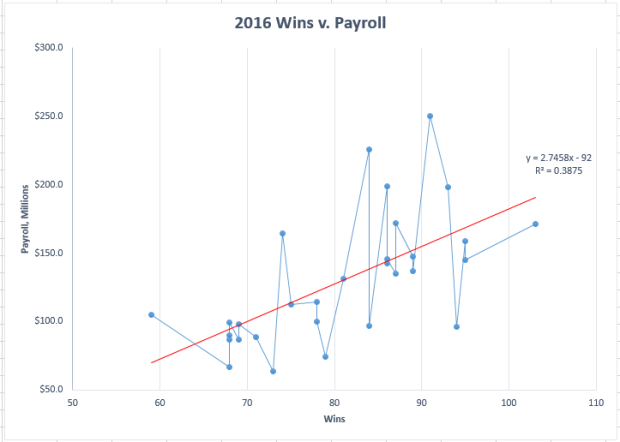 Correlation took a massive uptick from “non-existent” to “if you squint you can see some” this year. The teams that were truly rebuilding were all doing it the right way by slashing payroll and going with youth (aside from Minnesota).

How much would 90 wins cost? Using the equation on the linear regression line, a payroll of $155.1M would get a team to 90 wins in this edgy, not terrible theoretical equation. The Orioles and their 89 wins at $147.7M is the best comparison.

How did the Pirates compare? The Pirates had everything go wrong with injuries and performances and careened to 78 wins last year, all while on a franchise-record $100M payroll. Their payroll was 64.5% of the $155.1M theoretical threshold. By the equation, if a team in 2016 wanted 78 wins, they could have spent $122.2M. So, the Pirates saved money in their underachieving season. So….there’s that.

How did the playoff teams compare? Five of the 10 playoff spots were occupied by teams with payrolls less than the theoretical $155.1M playoff threshold payroll figure. The Indians, with a payroll less than the Pirates, gave the well-heeled Cubs all they could handle in the World Series before losing in Game 7.

The debate will never stop raging, but maybe this can at least quell one or two members of the pitchfork & torches mob. My argument has not been that the Pirates need to spend more money; it’s been that they need to spend the appropriate amount of money based on their revenue. I’ve long held that they’re underfunding the team by $15-20M. It essentially is hamstringing Neal Huntington while they are in the midst of their prime competitive window.

But in the end, talent wins out over all. If you have high-performing players on cheap contracts, that’s far better than average players on bloated ones. You don’t get a prize for payroll efficiency, but it’s much better to have some flexibility to make moves. The key, though, is to actually make the moves when the opportunity presents itself. (Go get Jose Quintana).

5 Comments on The Correlation, Or Lack Thereof, Between Payroll and Wins