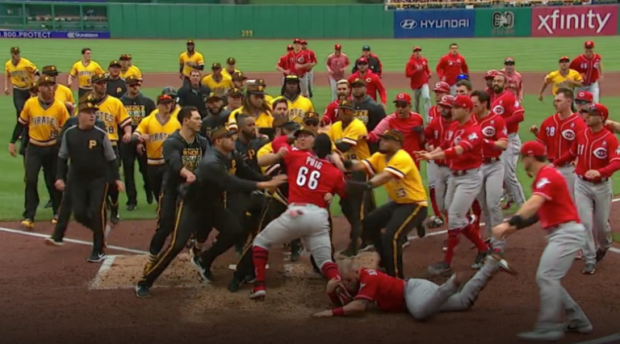 This is the sum total of Yasiel Puig’s contribution to the Reds this year.

Life is difficult for a small market team in baseball. I mean, between national TV revenue, local TV revenue, MLB Advanced Media money, sponsorships, naming rights, revenue sharing, attendance, and food/merchandise, it’s really hard to put together a winning payroll for $120M. (Note to self, don’t hit Publish until you’ve updated the sarcasm font or else some people won’t get it.)

It’s even harder if you’re the Cincinnati Reds and you can’t commit fully to either rebuilding or contending in recent years. After being a legit contender in 2013 (has anyone ever mentioned to you that the Reds and Pirates played a Wild Card game in 2013 at PNC Park and Johnny Cueto was on the mound?), the bottom started to fall out for the Reds.

They have had a solid offense over these past few years, but their once solid starting rotation decayed into dust. Their farm system, whether it’s drafting or development or a little of both, has failed to produce any pitching talent of note this past half decade. For the entirety of the 21st century, the Reds have made twelve 1st round or supplemental 1st round picks on pitchers. Only Mike Leake and Homer Bailey (for a little bit) could be considered successes. Their much-vaunted 2017 1st round draft pick, Hunter Greene, is out for the year with Tommy John surgery. The littered bodies of once-hyped starting pitching prospects like Robert Stephenson, Amir Garrett, Michael Lorenzen, and others fill the bullpen and the waiver wire.

The Reds do have a legit franchise player in Joey Votto. I’m starting to think that Votto is actually a Westworld-esque robot created in a warehouse in the Over-The-Rhine neighborhood to play baseball. He was just labelled as Canadian to cover up for his bland, inoffensive personality. But there are signs that Vottobot is becoming sentient, as evidenced by this shirt and this incredible stat:

On the left are Joey Votto’s (rare) popups from the first 1,591 games of his career.

On the right is Votto’s popup from today — the one that finally went to the first baseman. pic.twitter.com/i32S9riiNg

So with Votto’s deal running through 2023 at $25M/year, the Reds decided this past offseason to jumpstart a reload on the fly by making some moves and spending money to bring in players to bolster the roster. Sounds great! Except the execution of this idea made it look like they were using a 2015 Baseball Almanac.

Homer Bailey ($23M in 2019, plus a $5M buyout in 2020) was a complete sunk cost for the Reds, so they offloaded him to the Dodgers along with Josiah Gray and Jeter Downs in exchange for three underperforming contracts in Matt Kemp, Alex Wood, and Yasiel Puig, plus Kyle Farmer. Then the Reds traded Shed Long and a 2019 Competitive Balance draft pick to the Yankees for out-of-favor SP Sonny Gray. And they completed their shopping spree by trading Tanner Rainey to the Nationals for SP Tanner Roark.

All five of these guys they received had two things in common — one, they were really last great in 2015 and two, they were all free agents at the end of 2019.

So the Reds wanted to create excitement, but only for one year because all of these guys were going to potentially depart after the season. It’s not like this quintet was just buying time for the next great wave of Reds prospects percolating in AAA, either. Aside from 3B/2B/CF Nick Senzel, the next grouping of prospects is mainly down in High-A and AA ball.

Now, the Reds did sign Gray to a 3 year/$30.5M extension in January, but it was up in the air at the time if three more years of Gray is a great thing to possess.

After the first month of the season, the Reds sit in last place in the NL Central, where they finished last year, with a record of 14-20. To make matters worse, most of the new acquisitions are the reasons why they are down there. Yasiel Puig’s greatest contribution to the Reds this year was when he attempted to fight the entire Pirate 25-man roster. Otherwise, his .205/.240/.368 line (55 wRC+, -0.4 WAR) is certainly not helping. Matt Kemp was actually even worse at .200/.210/.283 (24 wRC+,-0.7 WAR). When I started this article last week, I typed ‘He’s looking like a great candidate to be designated for assignment this summer’. He didn’t even make it to Cinco de Mayo before getting DFA’ed over the weekend. Alex Wood has yet to pitch an inning for the Reds, on account of his chronically bad back flaring up before the season started.

Gray (3.89 ERA/2.37 FIP) and Roark (3.82 ERA/3.66 FIP) have stabilized the rotation, but neither of them are providing deep outings, as both are averaging 5 innings per start. It appears as if Luis Castillo, obtained in a trade with the Marlins in January 2017, may escape the event horizon of the Reds’ pitching development woes as he appears to be having a breakout season (1.97 ERA/2.89 FIP), albeit with an unsustainable BABIP (.243) and strand rate (85.8%).

The school of thought at the time of the trade was that if the Reds were bad, they could trade Puig/Kemp/Wood/Gray/Roark and recoup the prospect capital they expended in the deals to get them originally. As stated, Puig/Kemp/Wood are not looking like they’ll return anything of note. Gray signed a deal, ostensibly under the impression that he was staying in Cincinnati. That leaves Tanner Roark and to be polite, he’s not going to recoup the equivalent of Shed Long/Josiah Gray/a supplemental 1st round pick for the Reds.

But at least the Reds are generating excitement for their fanbase! Uh, well…we need to talk about that. All those big names and offseason hullabaloo have yet to show an impact on attendance. As of this past weekend’s games, the Reds’ home attendance is 16,944 per game, a gain of just 115 fans per game over the same number of home dates in 2018. Reds Fever has not yet reached a critical mass.

The lesson in all of this, for the Pirates or any team, is that you shouldn’t feel compelled to ‘star chase’ in order to build a winning team. The Reds would have been far better served to release Bailey themselves, keep their prospect capital, and decide to make some shrewd investments in the depressed free agent market. They did that with Derek Dietrich, by signing him to a minor league deal worth $2M at the Major League level, after Scooter Gennett went down preseason with a groin injury that will sideline him until late May/June. But instead of watching Kemp stumble around the outfield, wouldn’t Adam Jones at $3M have been a better investment ? Would Michael Brantley have wanted to stay in the state of Ohio and signed his 2 yr/$32M deal with Cincy ? The Reds increased their payroll by about $25M from last year, but wasted that capital on poor investments.

The cries of ‘Do Something!’ only work if the plan is a sustainable one that can provide both short AND long-term returns on the investment. Come October, the Reds will most likely be completing another sub .500 season (their 6th in a row) and possibly their 5th sub-70 win season in a row. Aside from Sonny Gray, all their trade acquisitions will be gone, plus some prospect capital, and the Reds will be in the exact same position they were a year prior. What’s the plan going to be next year?