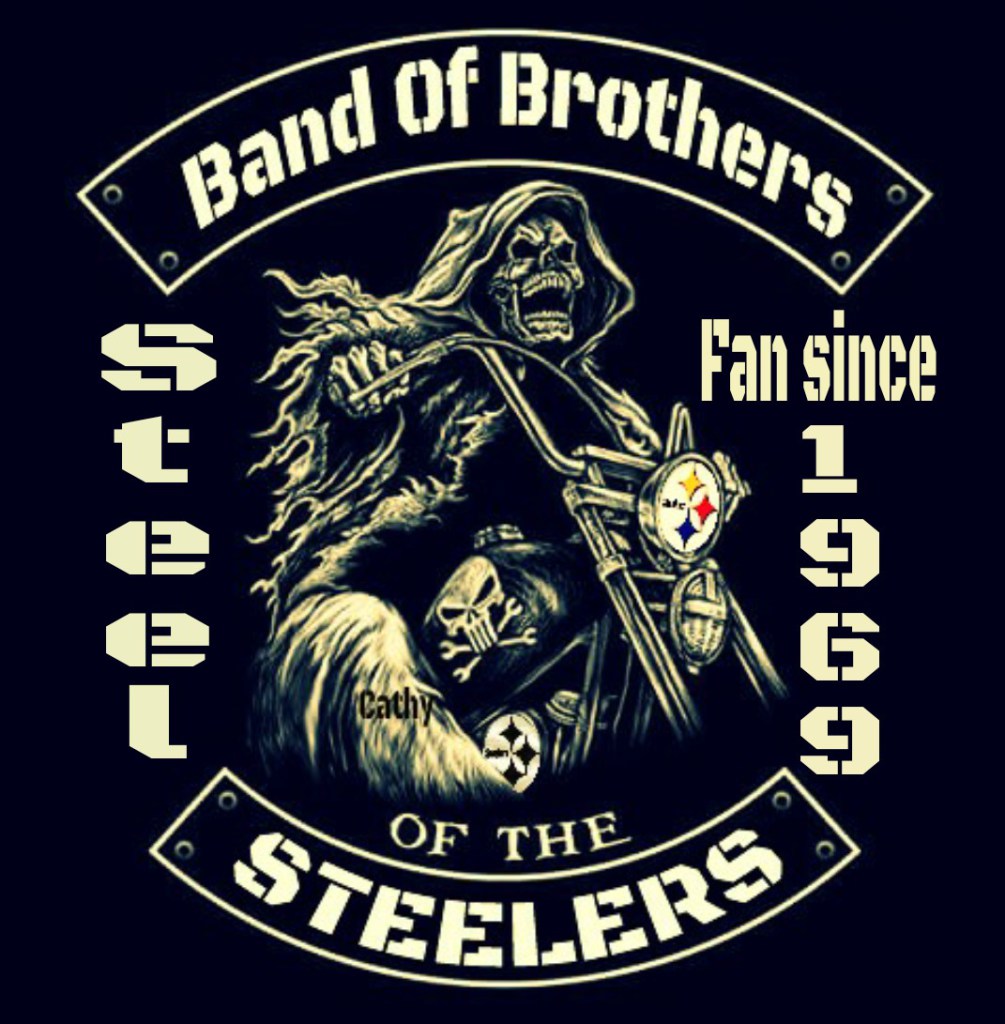 A very cool meme made for fans on Facebook, by the head of Steelers Nation group, Cathy Furrow.

The Pittsburgh Steelers are six time Super Bowl Champs, which in and of itself is enough to label the franchise as great. The fan base of this storied franchise is spread, literally, all around the world. From China to Hawaii, to all points in between, there are photos of natives and tourists waving the Terrible Towel. Away games for the Steelers are acknowledged by the players as having a home game feel because of how well the fans travel. Steeler Nation itself is further proof of what a great franchise the Steelers are, but what exactly makes them great? It’s a question I’ve been asking myself for awhile now, and there is more than one definitive answer that covers more than just their on-field performance over the last forty-plus years. The greatness of the Steelers obviously starts with the arrival of Chuck Noll as their head coach. It takes on an even deeper meaning when you realize that the Pittsburgh Steelers have done so much more for the the region of Western Pennsylvania than win football games. It’s the very reason that Steeler Nation is what it is today.

In 1969, when Chuck Noll began the process of building an NFL dynasty, the region of Western Pennsylvania and its 300,000 plus steelworkers were making the steel used to build this country’s skyscrapers, cars and infrastructure. The one diversion they enjoyed, yet were frustrated by, was the Steelers’ losing ways. All they wished for was a winner. In the next few years, the steel industry in Western Pennsylvania began to collapse, as almost a hundred thousand steelworkers lost their jobs. A good portion of those people had to pickup and relocate to different points across the country. By this time however, the one good thing these workers, their families and an economically depressed region had to feel good about, was their Pittsburgh Steelers. Everyone from Art Rooney on down to the last man on the roster was consciously aware of how much their success meant to these people.

In today’s NFL, it’s all about the money for the franchises and their players. In Pittsburgh it’s almost always been about the love affair between a team and its fan base. Getting back to that time in the seventies when the steel mills were shutting down, Steeler players were well aware of how much they meant to the region. They openly admitted that they played hard to give their fans something to feel good about and look forward to each week. They always said that each Lombardi Trophy they won was as much for the fans as it was for them, including all those fans that had to move on from Pittsburgh to other parts of the country. You can take those people out of Pittsburgh, but you can never take Pittsburgh out of those people, and the Steelers gave them pride in their hometown. The Steelers helped those laid off mill workers get through a very tough time and they were proud to do it.

Steeler Nation is an extension of the franchise that we love. The Steeler franchise has fostered an environment that’s family like, a Band of Brothers. Steeler Nation is no different in this regard. Everywhere I have ever been, from Las Vegas to Panama City, Florida, whenever I have come across another Steelers fan, it is like we’ve known each other all of our lives. It’s not just a fan base, Steeler Nation is its own family. It’s the reason why Steelers fans take over opposing team’s stadiums, and the reason why they take extreme measures to keep us out. Those teams aren’t just taking on our Steelers, they are taking on Steeler Nation as well. On Facebook, Steelers players, current and former, interact with fans on a regular basis. They talk football, life in general, and promote the charities that are special to them.

These players love Pittsburgh, the fans, and helping out the local community. That is what the Rooneys have preached through the years, and the players have bought into it and give from their hearts. Their act of giving is yet another aspect that makes the Steelers great. Each year, Steelers players host golf outings, bowling tournaments and cancer walks to raise money for various charities, drawing numerous former teammates and retired Steelers players from all over to help out. They know their names can and do make a difference in the city many choose to call home when their playing days are over. Perhaps the most charitable person associated with the Steelers was the late and legendary Myron Cope. In 1975, in time for the postseason, Myron created what is now known world wide as the Terrible Towel, to rally the Steelers past the Cowboys to their second Super Bowl title. Throughout the years, a generous percentage from every Terrible Towel ever sold has gone to the Allegheny Valley School of Pittsburgh, a very special charity that was close to Myron Cope’s heart.

There is no other team in professional sport that shares a bigger bond with its city and its fans. The fans and the team have been there for each other through good times and bad, like the big family that we are. There is also no other team in professional sports with a larger percentage of female fans than the Steelers. In fact, the Steelers routinely host women’s fantasy camps that quickly sell out.

The women of Steeler Nation are more than just casual fans, they will talk football as quick as any man will, and they know exactly what they are talking about. They start and maintain Steeler groups on Facebook, like Cathy Furrow and her Steelers Nation group, or like Jaime “Steelermomma” Lucchetti and her Steelers Training Camp group. Some of these ladies sport many cool Steelers tattoos. They are all, for the most part, as knowledgeable and 100 percent behind the Black n’ Gold as passionately as any man. The Steelers’ organization loves and encourages them. There is definitely no professional sports franchise that appreciates their female fans more than the Steelers do, which is why they have so many.

Unlike most teams nowadays that are group or corporate owned, the Steelers are still owned and controlled by the Rooneys. They still believe in the tradition of a family environment created by the Chief. Whether it’s luck or a case of being blessed to be born into Steeler Nation, I could never even imagine being a fan of any other team and missing out on the greatness that is the Pittsburgh Steelers.

Brian is a Steelers contributor to the Point of Pittsburgh. Born in Johnstown, Pennsylvania, he currently lives in Wheatfield, Indiana where he is a steelworker at ArcelorMittal USA. Brian is a blogger/Co-owner of Pittsburgh Sports Forum and https://reignreport.wordpress.com/
Contact: WebsiteFacebookTwitter