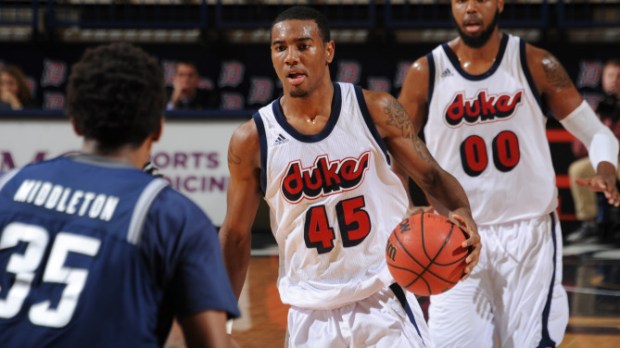 Freshman Isiaha Mike has adapted quickly to college basketball and looks to lead a new core into A-10 play.
Image via Duquesne Athletics

On March 4, 2015, the Dukes took a disappointing 10 wins into Fordham’s Rose Hill Gym. They lost to some crap teams in non-conference and blew some games they should have won earlier in the year. Some nights they came out flat like when they visited St. Louis and hit just 38% of their free throws. Others, like their home loss to St. Bonaventure in overtime, their porous defense let them down. Duquesne fans endured Micah Mason’s struggles as he switched from shooting guard to point guard. It wasn’t an essential change but an extremely disruptive one. Mason responded like someone fed him a footlong meatball sub on normal bread when he had to carry the basketball over mid court.

That day, Tom Percora was on the hot seat, though things were looking up for the Rams. He had two of the better freshmen in the league and every starter was a relevant player, not just starters that were eligible again the next season. Fordham struggled mightily early in the season, posting a losing non-conference record and dropping their first 9 league contests in a row. However, they looked like they were turning the corner a little bit winning 4 of the previous seven. Some, like their fifteen point win over La Salle, were quite convincing. With another team looking likely to finish in the bottom four, the Rams may have thought they’d run it to ten. Instead, the Dukes put in one of their best performances in an all together meaningless game for everyone except Pecora. While his fate may have been sealed long before this, I’ve always felt like the Dukes put the final nail in his coffin as the head coach of the Rams. They won one more game in the first round of the Atlantic 10 Championship, but that was all she wrote for him. He was fired shortly after the season ended.

While it will only be the first game of the conference season, Duquesne at Fordham may go a long way to determining the Dukes’ coaching situation in the offseason. After a promising 5-1 start to the season, Fordham have fallen back and struggled. Meanwhile the Dukes have been up and down beating Pittsburgh, but losing to UMBC and Robert Morris in the same week. They lost some close games, but they also blew some big leads against inferior opponents.

Jim Ferry finds himself on the hot seat this time around and for him a good start in conference play will be crucial. Like Pecora, Ferry has a promising young crop of players with Mike Lewis II and Isiaha Mike winning 5 of the first 7 Atlantic 10 rookie of the week awards in the 2016-17 season. He also returns most of his core players for next year. However, the rough non-conference will make it considerably more difficult for him to hold onto his job. At this point, his team needs to make up for a poor start against more difficult league opponents.

Since the beginning of the season, my magic number for Ferry has been 14 wins. If he hits that, he gets to come back for a sixth season, provided his freshman and sophomores look like a group fans could put their faith in. I believe they have. Lewis II has exceeded all expectations and after a slowish start, Mike is beginning to look a little more comfortable. He still turns the ball over too much but he’s going to the hoop and the free throw line more in the last five games. Tarin Smith is also beginning to get his game legs back. His finishing is a still a bit off at times but he’s taking better care of the basketball and attacking the hoop the way we expected he might. Meanwhile, Nakye Sanders has taken the full time starting position from senior Darius Lewis and might quietly be the team’s most valuable player, despite scoring in double figures just once. The suspended Josh Steel looked excellent in his two games and could cut deeply into Emile Blackmon’s minutes if he ever gets on the court again. All five have two or more years left in their career and all, except Steel, have gone a long way to establish themselves with another crop of solid recruits on paper following them next year to serve as depth with a bench full of seniors.

It’s also worth noting that this group can defend pretty well unlike Ferry’s earlier recruits. They have the best defensive rating among any Ferry coached teams so far. They also tightened up late in the non-conference and even on days when the offense has struggled, and it’s struggled often, they’ve kept themselves in games. To me, this is a top 100/bubble NIT core. If the incoming class lives up to expectations, the group could play even higher. That’s where I want to program to be eventually, but I will take it as progress.

Pecora was in a similar situation at the end of 2015. Sure he took his lumps and honestly showed less than Ferry in his first five years. However, he had an elite player in Eric Paschall, a young core around him and some veteran leadership with Ryan Rhoomes and Mandell Thomas. Jeff Neubauer posted a winning record his first year, but could you imagine what might have been if they still had Paschall? Would they have taken the step back they did this year so far this year? It’s my opinion that Pecora had the program ready to compete. Neubauer got to take the credit. The new coach did improve defensive efficiency but not by much more than I would simply attribute to the maturation process. The offense took a step back.

However, Ferry has to show us a little something. It’s difficult for me to envision seven conference wins without the Dukes beating the Rams twice. Can it be done? Sure, but every loss and the road gets a little more difficult. Mark the sweep for the Dukes on rpiforecast.com’s Wizard, and sure enough the Dukes’ projected record is 14-17. Split and we’re down to 13-18. Lose both, and you guessed it, the expected outcome is twelve wins. You can’t sweep a team if you don’t win game one, starting this Friday night.