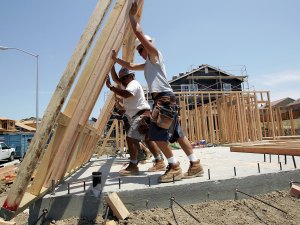 Things are going to get quite, uh, interesting come January 2017 when the new President is sworn in.  The crux of his campaign was about creating more jobs that would provide good wages for hard-working Americans.  His campaign also frequently discussed taking better care of our veterans.

On the other end of the spectrum, the incoming President is not exactly a fan of certain Cabinet-level departments and has at times talked about either eliminating them entirely or curtailing them severely.  One of those departments in Housing and Urban Development (HUD), which provides important grant and loan opportunities to state and local governmental bodies to create and maintain affordable housing for low-income families.  At this juncture, I’m not getting a warm and fuzzy over his commitment to this department, as evidenced by his proposed appointment of a neurosurgeon in Dr. Ben Carson to head the country’s biggest conduit of funding and policy for housing.  To me, it seems like he wants it to die slowly on the vine.

To stem this off at the pass, Democrats and fair-minded Republicans should force his hand by creating an initiative that enables him to keep his campaign promises, while also getting something they want in good affordable housing.  That program should be one that fosters the creation of veteran-owned and staffed construction companies, not just the token veteran-owned ones that get a few extra points on the grant funding application.

Whether you picture it as a new New Deal or just a jobs training program, there are plenty of recent veterans that can be re-purposed into excellent contractors.  Many soldiers have to learn rudimentary building, plumbing, and electrical skills while serving just to maintain their own situations while out in the field.  By focusing specifically on skills training for creating a whole armada of building contractors, the federal government can take care of their own when they return home if they don’t have a stable profession.  The Department of Veteran Affairs would the logical jumping off point for returning veterans, or veterans in need of a new field, to apply for building construction re-training.

Once the new workforce is properly trained, they can be funneled directly into various HUD-sponsored building projects as designated contractor units.  The project doesn’t necessarily have to be staffed entirely by veterans, but there could be some percentage of re-trained workers assigned to each project, even if it’s just a small number.  Contractors local to the area that are veteran-staffed would be given priority in HUD contracts.

According to the National Association of Homebuilders, as of September 2016 there was a 200,000 person shortfall of qualified housing construction workers in this country, a jump of 81% over the last two years.  Returning veterans can help backfill a portion of that gap.

Just look at the projects page for Pittsburgh’s Urban Redevelopment Authority.  There are plenty of affordable and mixed-use housing projects on that list, with virtually all of them buoyed by some sort of HUD-based grant or loan.  It’s simply how things get done in cities to provide quality housing stock.  It’s engrained at this point.  The potential to re-integrate veterans into this workforce is untapped.

Certain types of jobs are simply not coming back to the States, no matter how much bluster is given in a soundbyte.  But construction is a constant in this country, especially in the housing market.  Americans are always looking for newer and better.  Our affordable housing stock that ghettoized communities in the 1960’s and ’70’s needs to be turned over or rethought entirely.  There are ample opportunities to give our returning soldiers a solid profession of dignity, while addressing an issue of importance nationwide.  It’s the type of initiative that could garner bi-partisan support and attempt to kick off this next olympiad of interesting times on the right note.