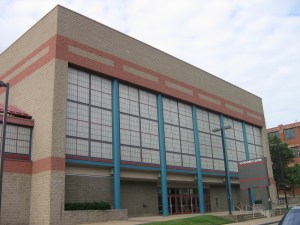 The A.J. Palumbo Center is going to be home to some rough games this season.

The Duquesne men’s basketball team had plenty of chances to put Canisius away Friday, but they fell short in a 78-77 loss.

Down 10 points in the first half, Mike Lewis had three shots at the line. He missed two. With just over three minutes to go in the game, Tarin Smith fell down near midcourt, resulting in a turnover and an easy layup to tie the game at 70. After taking the lead back with nine seconds to go, Duquesne left a senior forward wide open, and he hit the game winning 15 foot jumper.

Things like this are bound to happen when you start three underclassmen. All three of those mistakes were committed by either freshmen or sophomores, and four underclassmen were on the court on the deciding shot.

Simply put, Duquesne is at the start of a year of growing pains. At least a couple more losses like this are on the horizon.

“For the most part, we are a younger team. We’ve got guys that haven’t played as much or as many games as other guys,” guard Emile Blackman said. “…it’s good for guys like Isaiah and Mike to be finishing a game like that, and although we didn’t get the result that we wanted, we lost by one point…it will pay off for us going forward.”

It’s probably not fair to compare this year’s team with the 2015-2016 squad. Last year they had seniors Derrick Colter, Micah Mason and Jeremiah Jones, and even then they could only barely crack .500. Freshmen Isaiah Mike, Lewis and Spencer Littleson have promise and could be the next big three for Duquesne, but it will, of course, take time.

And after finally getting a taste of being a legitimate program last year, starting another rebuild is a tough pill to swallow.

Still, all things considered, things have not been too bad for the Dukes so far. Yes, they were embarrassed in their exhibition game to start the year and they have three losses, but two were on the road to Penn State and Kentucky, so the average fan can’t be too disappointed.

There’s been some sloppiness, but most of their young players have had at least one good game. The flip side of that is many of them have had a very bad game as well. It’s the curse of trying to learn to play together but you can’t practice because you have eight games in November.

Lewis went 6-13 from the field with three 3-pointers in a 19 point performance against Penn State (which earned him A10 rookie of the week honors), but he followed that with 11 bad minutes against Saint Francis.

Littleson has been aggressive from three, and he made four deep balls on seven attempts his first two games, but has gone 2-12 since.

Mike has been the most consistent out of the three, but his five turnover game against Saint Francis was not pretty. A lot of those miscues by Mike happened in what fifth-year coach Jim Ferry called the “ugliest 15 minutes” of his career.

Mike’s worst performance probably came in the exhibition game on Nov. 5, where he got into foul trouble early before the Dukes blew a nine point lead to a Division II team. Between the charges and the turnovers, Jim Ferry said he and the other younger players have to find that balance between being aggressive and being reckless.

Ferry said at that same presser that he was confident in his offense this year, and so far, he’s been right. The Dukes averaged 76.3 PPG in their first four contests (I’m omitting the Kentucky game Sunday because that was a mercy killing). Despite losing their four leading scorers from 2015-16, their .458 shooting percentage is just a shade lower than last year, when they shot .462 from the field.

His main concern then was rebounding, and for good reason. Duquesne has 6’11” senior center Darius Lewis, but it’s telling that he was on the bench at the end of the Canisius game when his coach was looking for a rebound. Even though the big man had fouls to give, Ferry went with Nakye Sanders because he feels he is the team’s best man on the boards.

Sanders and the rest of the team did not come through and Canisius grabbed an offensive board before taking the lead with just seconds remaining in the game.

Now that these players have had a taste of what collegiate level basketball is like, they have found two other things they will need to work on: communicating and starting better.

The communication problem will probably sort itself out as the year progresses (like it does for almost every team).

The poor starts have been more surprising. Duquesne has trailed by at least 10 in the first half in three straight games. In the two games that weren’t Kentucky, they were able to mount a comeback to take the lead. (If you watched last year’s team blow double-digit leads in four straight losses, that last sentence may have come as a shock. I hope you were sitting down when reading it and not at a standing desk because I don’t want anyone to get hurt while fainting).

While the comebacks show resilience, the Kentucky blowout proves they can’t do it every game.

“(We have to do a better job) trying not to dig a hole for ourselves early,” Mike said. “We’ve really got to focus on offensive execution and really buckling down on defense.”

Duquesne is hopefully on its way to becoming a legitimate program again, but if they are, they’re on their first step. Mike, Lewis, Smith, Sanders and Littleson should all improve as the year goes on, but the non-section schedule is no longer a cakewalk for the Dukes, let alone A10 play.

To borrow a phrase from another Pittsburgh sports team, this will probably be a bridge year.