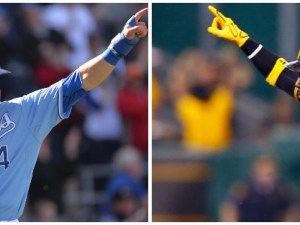 Both the Royals and the Pirates have benefited from their 2005 1st-round picks of Alex Gordon and Andrew McCutchen.

I’ve long held to the notion that the Kansas City Royals are the American League doppelganger of the Pittsburgh Pirates. Both franchises had extreme periods of losing seasons, with the Pirates’ stretch from 1993 to 2012 nearly being equaled by the Royals’ stretch from 1995 to 2012, were it not for Tony Pena somehow coaxing the 2003 Royals to an 83-win season (after they won only 62 in 2002, then proceeded to win just 58 the following year in 2004).

Both franchises became resurgent in 2013 on the basis of homegrown talent. The Royals especially so with players such as Mike Moustakas, Eric Hosmer, Alex Gordon, Salvador Perez, Yordano Ventura, and Danny Duffy all key components of the team that eventually won the World Series in 2015. When the Pirates and Royals played an interleague series in 2015, I billed it as a possible World Series preview. At least I got one half of that prediction correct.

The 2016 season was not kind to either franchise. The World Series Champs regressed to an 81-81 record, while the Pirates plummeted from 98 to 78 wins. The Royals’ GM has already said at the outset of the offseason that the team was going to scale back on payroll for 2017, from the $131.5M Opening Day payroll they had for 2016. As a comparison, the Pirates opened up 2016 with a $99.9M payroll. Keep in mind that the Royals probably got between $20M and $30M in extra revenue from going all the way to the World Series in 2015, on the heels of being in the World Series (and losing) in 2014, as well. The Royals also keep a portion of their parking revenues, which the Pirates do not, as part of the agreement with the Sports and Exhibition Authority.

So with that statement of a reduced payroll, things are probably going to get interesting this offseason for the Royals. As per Cot’s Contracts, they already have $108.6M committed to 13 players (which includes an $8M dead money item to Omar Infante). They have 4 arb-eligible players that form an expensive $30M potential class. Add in $4M for 8 more min-scale players to get to a 25-man roster and you’re looking at $142.6M. Trades and potential non-tenders are looming.

There’s a school of thought the Royals will trim a few million and then give it one more shot at contending in 2017, because at the end of this year things are grim on the outgoing player front. Here’s the players due to be free agents at the end of the year:

That’s a lot of talent due to exit at the end of 2017. I think the Royals should give it the ol’ college try and if GM Dayton Moore doesn’t think the team is a contender by July, there’s going to be an epic fire sale. Some of the players could be kept and issued Qualifying Offers (if that still exists in the new CBA coming soon) so that the Royals can recoup supplemental round draft picks. But other players should be cashed in for whatever assets can be obtained. The Royals farm system is pretty well tapped out at this point, so there’s not a lot of help on the horizon. They’ll be experiencing a few lean years of a rebuild.

The Pirates are finding themselves in a modified version of this quandary. While they don’t have the looming free agent crisis, they are faced with the prospect of 2017 being the last year of Andrew McCutchen’s tenure with the team. If he’s kept all year (and as long as they’re in contention, they should), they’ll trade him this time next year to a team that will pick up his 2018 option at $14.5M. That will alter the trajectory of the franchise for some period of time, to be determined by the return of the package for him, of course.

While there’s definitely some bones to pick with how the Pirates have used (or not used) their payroll capacity in recent years, at least it can be said that Neal Huntington hasn’t painted the team into a corner like the Royals have done. Although the Royals fans can look at the 2015 World Series pennant flying above Kaufmann Stadium and mellow out while they undergo a painful rebuild next year. Flags fly forever.

The Royals have done a few things that I can’t ever see a Huntington-led team doing and I hope that continues.

On the heels of winning the World Series in 2015 with a very average starting pitching staff, the Royals decided to use some of their newly found largesse and buy a very mediocre starting pitcher to kinda-sorta stabilize the rotation. By signing Ian Kennedy to a 5 yr/$70M backloaded deal, the Royals get to enjoy more of his 3.68 ERA/4.67 FIP for $16.5M/year from 2018-20, aside from the $13.5M he’s owed this coming year. He pitches like a low-end #3/high-end #4 and would a good player to have on a much shorter, non-backloaded deal. They’ll probably have to eat some of that 2018-20 salary if they want to move him along.

At the end of 2015, Alex Gordon was a free agent. The 2005 1st-round draft pick transformed himself from an underachieving, injury-prone 3B into a Gold Glove-caliber LF that was a cornerstone of the team from 2011-2014. However, even in that World Series year, he was showing signs of slipping. But much like the Pirates’ 2005 1st-round pick, Gordon took an early team-friendly deal, so to reward him, the Royals signed him to a 4 year/$72M from 2016-19. This past season was nothing special. And now the Royals owe Gordon $16M/$20M/$20M over his age-33/34/35 seasons. That’s a huge chunk of payroll locked into a player on the downslope of his career.

The Royals pretty much screwed over Salvador Perez. Perez, perhaps naively, signed a 5 year/$7M very, very early in his career. He soon blossomed into one of the best two-way catchers in the game. Aside from Mike Trout, Perez was the best bargain in the game. Whether it was out of guilt or a good baseball decision, the Royals signed him to another extension in March 2016 for 5 yr/$52.5M that kicks in starting in 2017. The problem is that catching 130-140+ games a year has already started to take a toll on Perez and his bat is leaking oil. It was showing signs of decline prior to this new extension, too. His defense still rates highly, but paying Perez $14M in 2020 and 2021 is going to come back and bite them.

The Pirates should make every effort to contend this year. If they have to re-evaluate in July, then so be it. Unlike the Royals, the Pirates still have a solid core under control at affordable prices moving forward, plus they have some players still on the farm that can help augment the team. The Pirates need to spend more on payroll, but they have to do it in a wiser fashion than the Royals have. But there is that World Series flag, though…