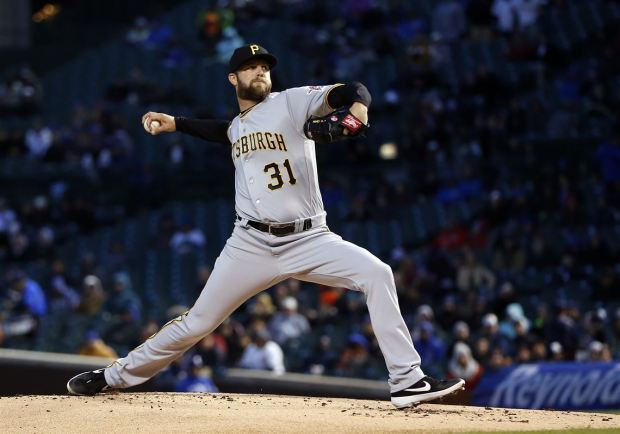 Jordan Lyles is already one of the Pirates’ greatest reclamation stories. Can he keep it up? Photo by AP.

In a winter that was marred with inactivity, GM Neal Huntington perhaps drew the most heat for a move he did make: signing right-hander Jordan Lyles. To make room in the rotation for a pitcher with -3.3 career bWAR, the Pirates had to dump unremarkable, but overall perfectly satisfactory fifth starter Ivan Nova. Not exactly a good look. It looked worse as the offseason drudged on and other, seemingly better starting pitching candidates fell into the Pirates??? price range. It looked even worse when Lyles was getting pounded this spring. Somehow, someway, it looked even worse when he started the year on the injured list.

Going into the season, this seemed like the makings of one of Huntington???s biggest goofs as Pirates GM. The only way this team could succeed is with its starting pitching, and they were going to trot out a landmine every fifth day. Instead, this move just may be one of his greatest finds.

Lyles has arguably been the Pirates best starter this season, posting an eye-opening 2.09 ERA and 1.5 pitching bWAR in his first seven starts. The only pitchers from last year???s free agent class with more WAR than him so far are Patrick Corbin (2.0) and Hyun-jin Ryu (1.7).

Unlike Corbin and Ryu, Lyles has never had a year like this before. For comparison’s sake, let???s look at his season by season ERA+. Considering he has pitched in San Diego and Colorado, and through the pitcher-dominated turn of the millennium to the home run explosion now, this is the best way scale his yearly performances.

Like OPS+and wRC+, a 100 ERA+ is considered league average. Lyles flirted with that figure last year and in 2014, but he never cracked it before. Throughout most of his career, he???s been downright bad. This year, he???s in a completely differently stratosphere. He???s among the elite, ranking eighth in baseball in ERA+ among pitchers with at least 30 IP entering Monday.

And he???s doing it with his curveball. Lyles has used his curve 30.9% of the time so far in 2019. Since pitch tracking became available in 2018, the only other Pirate starters to use a curveball for a higher percentage of their pitches were Phil Irwin in 2013 (award yourself 10 internet points if you remember him) and Wandy Rodriguez. It???s a good pitch, which is why it sits near the top of the league leaderboards in whiffs.

This isn???t anything new for the Pirates. They have a good reputation for being a home to rebuild broken pitchers. Plenty of them, like Lyles, find success by throwing their ???best??? pitch far more often than ever before. With the exception of his stint in Milwaukee’s bullpen last year, Lyles is relying on his curve now more than ever.

It???s part of the reason why Lyles is already one of Huntington???s and Ray Searage???s greatest reclamation projects. Among pitchers who were predominantly starters for the Pirates, here are the largest WAR improvements compared to the year before they came to Pittsburgh in the Huntington era. 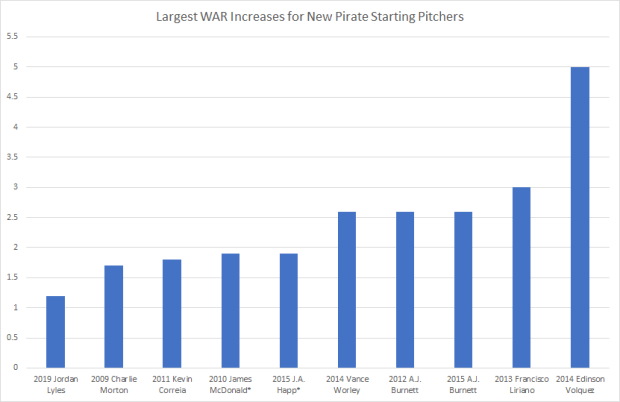 * Denotes midseason acquisition and compares WAR that season before the trade and after. Courtesy of Baseball-Reference. Click to enlarge.

Lyles has already had the 10th best turnaround for a Pirates starter, and we???re in the middle of May. Granted, some of these success stories are a bit exaggerated. Kevin Correia went from one of the worst WARs in baseball to replacement level. That???s still an improvement, but should you really pat yourself on the back for finding a quad-A player?

So here???s another wrinkle in that chart. What was their WAR the year of their turnaround? 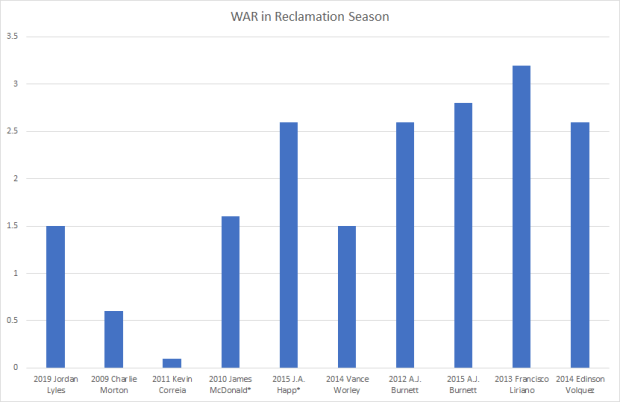 Now Lyles??? turnaround seems even more impressive. If he pitches near replacement the rest of the year, he???s still an average starter. Not too shabby for the number five guy. If he continues to succeed, it stands to reason he could have the best season of any Pirate reclamation. Only five of these pitchers were true impact players. Lyles is well on his way to making it six.

But how likely is he to continue to succeed? His FIP is still an impressive 3.47, but there???s a noticeable gap between that and his ERA. He???s also sporting a 7.1% fly ball to home run ratio. That could creep up during the warmer days of summer when the ball travels better. ??And then there???s his left on base percentage: 84.7%.

Some would call that strand rate unsustainable, but Lyles has actually pitched better with runners on base so far. Consider his splits based on situation:

Lyles is getting his best results out of the stretch, and it doesn???t seem like a fluke. He???s also getting softer contact and worse launch when there are runners on base.

That time as a reliever must have done him good. The further he???s pushed into the corner, the better he pitches. So yes, the strand rate is high, but if he keeps pitching like this when he???s in those situations, it could stay high.

Lyles was brought in to be the number five but has pitched like an ace to this point. With the Pirates??? top starter Jameson Taillon on the 60-day IL, he???s going to need to keep pitching at a high level. And that just might be plausible.