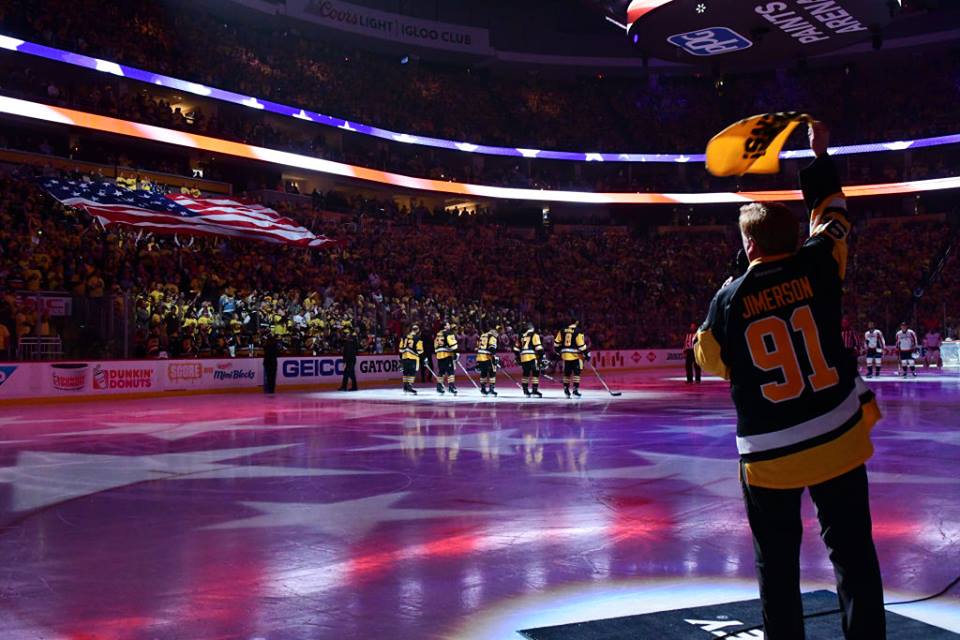 The National Anthem has been thrust into the spotlight, even more so, recently.
Photo via jeffjimerson.com

Recent events across the sports world have drawn attention to the tradition that occurs before the game instead of the action that occurs in it. Sports talk shows now dedicate as much time doing in-depth analysis of the actions of players during the National Anthem as what they did in the actual game.

On Sunday, the Penguins actually felt the need to release a statement regarding their planned trip to the White House to celebrate their 2017 championship.

“The Pittsburgh Penguins respect the institution of the Office of the President, and the long tradition of championship teams visiting the White House. We attended White House ceremonies after previous championships – touring the historic building and visiting briefly with Presidents George H.W. Bush and Barack Obama – and have accepted an invitation to attend again this year.

Any agreement or disagreement with a president’s politics, policies or agenda can be expressed in other ways. However, we very much respect the rights of other individuals and groups to express themselves as they see fit.”

The Penguins, a team comprised of players from Canada, Russia, Sweden, Germany, Finland, and the United States have taken the stance that they do not want to disrespect the office of the President and its member players, as of now, have all decided to go as a united front to attend the ceremony.

Regardless of your views on the matter, perhaps now is a good time to go back and revisit why the National Anthem is played before sporting events and what its original intent was. In 1916, in the thick of World War I, President Woodrow Wilson ordered that ?The Star-Spangled Banner ? be played at military and other appropriate occasions. The playing of the song two years later during the seventh-inning stretch of the 1918 World Series, and thereafter during each game of the Series is often noted as the first instance that the anthem was played at a sporting event. Apparently, other teams took note how well-received the playing of the Anthem was during the 1918 World Series and over the next decade it became commonplace for all World Series and holiday games and then, eventually, it came to be performed before every game.

Other professional sports leagues soon caught on, including the NHL. There are conflicting reports as to when the National Anthem was first performed before an NHL game, but over the years some NHL cities have had some very iconic ways in which they perform the song.

In Philadelphia it ?s a video of the legendary Kate Smith belting out the tune (although she is more famous for singing ?God Bless America ?). At the United Center in Chicago the fans cheer loudly from start to finish, while several Canadian cities sing ?O ? Canada ? in unison from start to finish. When a playoff series pits a Canadian team against a team from the U.S., it usually turns into a battle of which fan base can belt out their Country ?s Anthem the loudest.

There are many, many examples of memorable Anthem moments over the years. The following examples represent just a few.

Who could forget when Penguins fans, in unison, sang ?O ? Canada ? after the shootings at Parliament in Ottawa on October 22, 2014? Even though the Penguins were playing against Philadelphia that night, the team decided to have Anthem singer Jeff Jimerson perform the Canadian Anthem to show their support for their neighbors to the north. What ended up happening is the Pittsburgh crowd sang ?O ?Canada ? just as loudly as Jimerson himself.

Not to be outdone, fans in Edmonton showed that they respect their neighbors to the south last season. During Game 3 of a second-round playoff game between Edmonton and Anaheim at Rogers Place in Edmonton, a microphone malfunction derailed the plans for Canadian country star Brett Kissel to sing ?The Star-Spangled Banner. ? Without missing a beat, Kissel held the faulty mic up to the crowd and a moving scene followed in which Oilers fans sang the U.S. Anthem a cappella.

The National Anthem has also helped individual cities heal after times of tragedy. The Bruins fans taking over the performance of the ?Star Spangled Banner ? after the Boston Marathon was enough to give anyone chills.

Finally, there is a lasting memory burned into many NHL fans ? memories of the 1991 All-Star Game performance of the National Anthem at Chicago Stadium. The United States had just gotten involved in Operation Desert Storm in the Persian Gulf, which led to a show of solidarity that the Chicago fans displayed by cheering loudly from start to finish while Wayne Messmer sang the Anthem. This ?cheering ? tradition still lives on at Blackhawks ? home games today.

The performance of the National Anthem at sporting events has always been meant to unify, not divide. Hopefully watching some of the clips above will serve as a reminder.