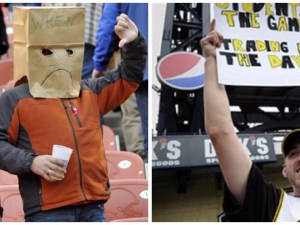 The Cleveland Browns lug a 1-14 record into their season finale against the playoff-bound Pittsburgh Steelers this Sunday at Heinz Field. After the Browns’ faithful had their franchise stolen from them by then-owner Art Modell and shipped to Baltimore to become the Ravens, their franchise’s rebirth in 1999 has been a comedy of errors. It’s probably best exemplified by this jersey in a downtown Cleveland store chronicling all the QB’s that have gone under center for the Browns since 1999 (and three more need added for 2016, apparently):

You have to really try hard to be this terrible for this long in the NFL, a league that thrives on parity to ensure maximum interest from all their fanbases. In a similar fashion, the Cleveland Browns remind me of the 1993-2012 Pirates in that both franchises were long ruined by incompetent management teams without a clear direction, undermined by injuries, and hamstrung by short-sighted efforts to be marginally competitive.

Both franchises had a string of terrible coaches. Each tried to get a “name” coach on the downslope of their career to reinvigorate them — Paul Holmgren for the Browns and Jim Tracy for the Pirates. After their failures, each franchise had to go cheap to make up for it — Rob Chudzinski for the Browns and John Russell for the Pirates. The Browns had a slew of other coaches since 1999 besides those two, of course, but the comparisons still stand.

The Cleveland Browns are basically a factory of sadness, but it appears as if they might be on the upswing, as hard as that is to say about a 1-14 team. The Browns now seem to have a plan and a direction, under the analytical eye of Chief Strategy Officer, Paul DePodesta. To continue the cross-pollination theme of the article, DePodesta comes from a baseball background, as he was at one time the L.A. Dodgers’ GM and part of the composite character played by Jonah Hill in Moneyball. To be clear, DePodesta has no football background, but he knows how to compile and manipulate assets.

Naturally, the jury is still out on DePodesta’s first draft. However, the decision to trade down from the #2 spot (presumably because the Browns didn’t think either Carson Wentz or Jared Goff were franchise-level QB’s) to the #15 spot, through trades with the Rams and the Titans doesn’t seem great right now. The Browns picked up a slew of picks in the two-tier trade (four with the Eagles, including a 2017 1st round pick and a 2017 2nd round pick from the Titans). I’m not an expert on the strengths and weaknesses of the upcoming NFL draft, but the Browns sure better be angling to take a QB at the #1 spot this time. The Browns enter the 2017 Draft with 11 picks, including two each in the 1st and 2nd rounds.

Things were bleak for the Pittsburgh Pirates until they hired the analytically-inclined Neal Huntington, ironically plucked from the Cleveland Indians, in 2007. They still suffered for five more seasons of losing until the first results of Huntington’s drafts and trades started to bear fruit. Draft picks aren’t tradeable (for the most part) in baseball, but the drafts run 30 rounds deep and there are opportunities to pick up players in later rounds that drop for various reasons.

Much like the early Huntington years, fans are fuming that the Browns are continuing to dig past the perceived rock bottom. The Browns this year have been embarrassing, but there have been a couple glimmers of hope in the form of a reborn Terrell Pryor and some of their 2016 draft picks like 2nd rounder DE Emmanuel Ogbah.

But you can’t build a winning team solely on youthful draft picks. There have to be productive veterans, preferably that come from winning backgrounds, that can help mentor the young players on what it takes. The Pirates didn’t start to truly turn around until players like A.J. Burnett and Russell Martin were brought in via trades. The Browns made a crafty trade in October for LB Jamie Collins from the Patriots, but it remains to be seen if he’ll a) sign a new contract with the team after he becomes a free agent at the end of the year and b) actually be a true team leader.

The Browns will have oodles of cap space entering the 2017 season. This past season they had $47+M of space unused and will have at least that much again this year. While it’s hard to imagine going from a 1-win team to a 9 or 10 win playoff-caliber team in one offseason, the Browns need to start building towards something. It’s much easier to turn from non-playoff team to playoff team in football than it is in baseball, due in part to the salary cap feature of the league.

The Pirates’ fans had to wander through the desert even longer than Dustin Hoffman and Warren Beatty in Ishtar. Over those 20 long, suffering, losing seasons, it would have been easy to give up. The Browns have been terrible for 18 seasons now (save for one lone playoff appearance in 2002 when they lost to the Steelers). Their fanbase is a terrific one that deserves better. Hopefully their suffering will be drawing to a close soon. After all, the Pittsburgh-Cleveland rivalry is much richer when both teams are actually competitive.