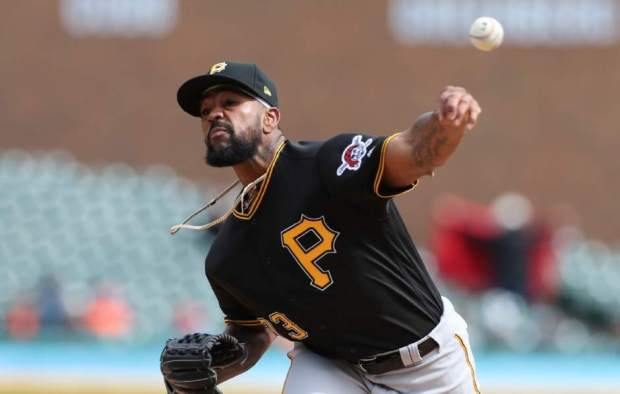 Felipe Vazquez has three dominant pitches. Which one is the best, and is it the best on the team? Photo by Carlos Osorio, AP.

It ?s the game of your life. Up by one in the bottom of the ninth. Bases loaded, two outs, 3-2 count. You can call on any pitcher to throw their best pitch. Who do you pick? Maybe Mariano Rivera ?s cutter? What about Sandy Koufax ?s curveball or Randy Johnson ?s slider?

What if it had to be a 2019 Pirate? Let ?s look at the current 40 man roster (including injured pitchers Chad Kuhl and Edgar Santana) and find out, looking at velocity/movement, spin rate, results and expected results. All stats are from the 2018 season.

This is pretty self-explanatory. How much gas do you have in the tank?

Speed is pretty worthless for a changeup in terms of MPH, but it ?s effective when it ?s significantly slower than their fastball. These are the widest gaps between fastball and changeup speed on the staff:

I ?m going to shift to a pitch ?s movement for the other two pitches on this list, as measured by Brooks Baseball. For sliders, it will be measured in horizontal break.

This isn ?t exactly news, but it ?s easy to see why Vazquez ?s changeup is so effective. It ?s hard to adjust to an 88 MPH pitch when it leaves the hand looking like it ?ll flirt with triple digits. Newcomer Jordan Lyles cracks the top three for both his changeup and curveball, which pairs well with his strong two-seam fastball. Crick gets serious movement on his slider, and Holmes ? curve isn ?t too far behind, either.

Every stat from now on will be exclusively from Baseball Savant. What better way to start than with their darling metric, spin rate? More spin correlates to more whiffs on a macro scale, so the more RPM, the better.

For these last three categories, if there is a number in parentheses, that is where it ranks across baseball among pitchers who threw at least 10 of those pitches. If it’s in the top 25, it will be listed.

The eye-opener is Kyle Crick, who lead baseball is slider spin rate last year. All that movement has to come from somewhere. Neverauskas ? curveball was hit at a league average clip last year (.269 wOBA), but it has a ton of spin. He ?s struggled in the majors, but his peripherals are incredible. It ?s easy to see why the Pirates haven ?t given up on him yet.

Spin from fastballs comes organically through speed, so it ?s not surprising to see Vazquez and Burdi near the top of the list. Rodriguez throws 92-93, but his spin rate is about 150 RPM higher than a fastball normally would be in that range. That extra spin is what got the attention of minor league scouts and makes his fastball so effective.

But peripherals are only half of the equation. Neverauskas may have great spin and velocity, but would you really trust the season with him on the mound?

Going by wOBA, these are the pitches batters struggled with the most in 2018.

That extra spin translated to good results for Rodriguez. He was a depth bullpen piece on a AAA contract this time last year. Now he has one of the top 25 hardest to hit fastballs in the majors.

The bullpen ?s secondary pitches are deadly. Vazquez had the hardest to hit slider in baseball last year, and Crick and Santana were dominant with that pitch too. Kela ?s curveball might not have the most spin or break, but it misses bats. His curve was 16th in wOBA over the 2018 season, but from his acquisition on July 31 on, it was the fourth best in baseball in this category.

Sometimes results don ?t tell the whole story, though. If a batter beats out an infield single on one pitch and rips a 400 foot flyout on the next, which was the better pitch? Expected wOBA (xwOBA) takes exit velocity and launch angle into consideration and consolidates it to one stat. This is what batters were ?supposed ? to hit against these pitches.

Not a lot of surprises by this point. Nine of these 12 top-three finishes were on at least one of the other three lists. They ?ve proved these pitch can move or can ?t be hit hard. The only outliers are Taillon ?s fastball, Rodriguez ?s breaking ball and Edgar Santana ?s rarely used changeup. Hardly an anomaly in the bunch.

So what ?s the best pitch?

I have a very unscientific method for valuing this rankings: third place is one point, second place is two, first place is three. If we use that scale, here are the final standings.

Vazquez and Crick ?s sliders were 1-2 in every category, so they both finish with 10. Crick ?s has more spin and movement, but Vazquez ?s is tougher to hit. Crick also threw it a lot more (25.8% of his pitches) than Vazquez (7.6%). While Vazquez ?s changeup was absent from the xWOBA list, he relied on it more (19.1%) than his slider. How large of a role should volume play?

There is a case to be made for Vazquez or Rodriguez ?s fastball or Kela ?s curve, but I would say it comes down to Crick or Vazquez ?s breaking stuff. Personally, I ?d lean towards Crick. The results are stupidly good and the pitch ?s makeup is even better. It could even improve in his first ?full ? season in the majors.

4 Comments on What is the Best Pitch On The Pirates’ Staff?